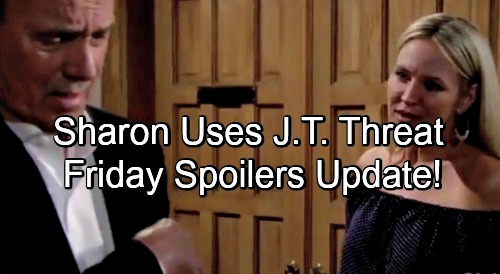 The Young and the Restless (Y&R) spoilers for Friday, June 8, tease that Abby (Melissa Ordway) will remain miffed about Arturo’s (Jason Canela) behavior. She’ll tell Kyle (Michael Mealor) about Arturo’s fling with Nikki (Melody Thomas Scott) and recent flirting with Summer (Hunter King). Kyle will suggest that Summer would be right up Arturo’s alley. He won’t think either of them is any prize.

Meanwhile, Arturo will complain to Nikki. He’ll be furious that she went behind his back and shared the affair news with Abby. Nikki will counter that they should’ve been truthful from the start. Y&R spoilers say Arturo will eventually track Abby down. He’ll apologize and urge Abby to give him another chance.

Unfortunately, Abby just won’t be willing to move forward with Arturo. She’ll let him down gently and suggest she doesn’t want an ugly split. Arturo will accept that and take off as Victor (Eric Braeden) arrives. Vic will be pleased that Abby’s done with Arturo, but he may want to hold off on celebrating. It probably won’t be long until Abby changes her mind.

Other Young and the Restless spoilers say Sharon (Sharon Case) will try to get through to Victor. She’ll find him at Newman Enterprises and beg him to ditch the custody fight. Victor will refuse to stand by and watch the next Newman heir slip away. He’ll insist he’s going to battle it out with Nick (Joshua Morrow) over Christian (Jude and Ozzy McGuigen).

Next, Sharon will try her luck with Nikki (Melody Thomas Scott). She’ll contend that Victor must be stopped. If Nikki can’t get her husband to reconsider, Sharon will promise to make her pay the price. She’ll suggest that Nikki won’t like it if she ends up behind bars! Sharon could blab about J.T. (Thad Luckinbill) if Nikki doesn’t follow orders.

Over with Devon (Bryton James), he’ll come home and find that Shauna’s (Camryn Hamm) moved in. Hilary (Mishael Morgan) will explain the drama Shauna’s dealing with and hope that Devon will get on board. He’ll seem bummed about the arrangement at first, but he’ll eventually see how important it is to Hilary. Devon will show his support by ordering two smaller beds for the guest room.

At the apartment, Phyllis (Gina Tognoni) will gripe about her daughter. Summer (Hunter King) will eavesdrop nearby and emerge after Phyllis takes off. She’ll be somewhat scantily clad, which Billy (Jason Thompson) will object to. However, Summer will insist that it’s her place. She’ll think she should be able to wear the pajamas of her choosing.

Billy will push Summer to keep the peace with Phyllis. He’ll think it’ll work out better for everyone, so Summer will agree for Billy’s sake. Later, Billy will find Kyle snapping at Summer. He’ll rush to her defense and urge Kyle to get back together his ex in private. Naturally, Kyle will suggest he’s not interested.

Meanwhile, Summer’s request for a new sports car will be denied. She’ll blast Phyllis for her refusal before she goes crying to Victor. The Young and the Restless spoilers say Grandpa will cave in, so spoiled Summer will get her way. Phyllis won’t be happy, but Billy will try to calm her down. He’ll think it’ll be one less thing for Summer to bug them about.

Some fun scenes are ahead on the CBS soap. We’ll give you updates as other details emerge. Stay tuned to Y&R and don’t forget to check CDL often for the latest Young and the Restless spoilers, updates, and news.