The Young and the Restless Spoilers: Naked Temptation Looms for Billy and Summer – Y&R Sets Up Bombshell for Betrayed Phyllis 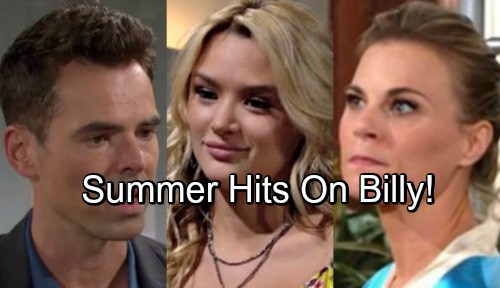 The Young and the Restless (Y&R) spoilers tease that trouble’s ahead for Phyllis (Gina Tognoni) and Billy (Jason Thompson). Now that Summer’s (Hunter King) back, the countdown is on to temptation. Y&R could be laying the groundwork for a Summer and Billy hookup – or at least some steamy seduction and a compromising position.

It looks like The Young and the Restless could already be setting this in motion. Let’s consider some potential clues. For starters, the show’s highlighting some important changes in Summer. She’s always been a little bratty, but her time away has really revved that up. With Summer’s new attitude, she’d have no problem trying to swoop in and steal her mom’s man.

Plus, Phyllis seems extremely uncomfortable with Summer’s return. Y&R’s setting up tension that could blow down the road. They’ve also indicated that Summer’s very much her mother’s daughter. She’s embracing those scheming roots and recently admitted to having a relationship with a married man. Summer shrugged it off like it was nothing, so cheating is no big deal to her these days.

When Summer first arrived, she got the scoop on Billy’s new role as Jabot’s CEO. Summer was impressed by the news, so she could find herself drawn to this handsome and powerful exec. Billy even showed a hint of compassion after Summer’s arrest. He urged Phyllis to go easy on her and see what Summer had to say.

It’s easy to imagine Y&R building on those moments. The Young and the Restless spoilers hint that Summer and Billy’s bond could grow stronger. They may become confidants as their own love lives become rocky. Summer may begin pining for Kyle (Michael Mealor), but he’ll certainly resist going down that path again. That could leave her in a vulnerable place and ultimately push her in Billy’s direction.

Phyllis is also keeping some huge secrets, so that could cause problems in her romance. Once the story of J.T.’s (Thad Luckinbill) death comes out, Billy should be hurt that Phyllis couldn’t trust him with the truth. Will Summer make her move while “Philly’s” on the outs? Nobody would be surprised!

Even if Billy and Summer don’t go all the way, they might come close. Phyllis might find them stripped down just before the deed is done. Then again, perhaps the blame will fall solely on Summer. She might flaunt herself only to get rejected, but a misunderstanding could still cause conflict for Billy and Phyllis.

Whatever the case, The Young and the Restless may be setting up a fierce mother-daughter war. Will a Phyllis and Summer feud ignite? We’ll give you updates as other Y&R details emerge. Stay tuned to the CBS soap and don’t forget to check CDL often for the latest Young and the Restless spoilers, updates, and news.