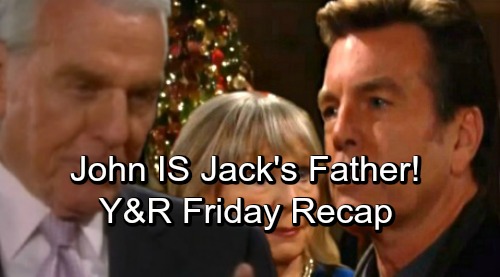 The Young and the Restless (Y&R) spoilers for Friday, October 12, tease that Jack (Peter Bergman) will take his concerns to Traci (Beth Maitland). He’ll suggest that Ashley’s (Eileen Davidson) in some sort of trouble, but she’ll think it’s best if he backs off. Later, Traci will find Ashley and ask what’s up. She’ll be worried about Jabot drama, but Ashley will insist Jack and Kyle (Michael Mealor) are the problem.

Jack just won’t be willing to let this go, so he’ll call a board meeting about Type A Consulting. That’ll lead to questions about Ashley’s business with Andrew (Coby Ryan McLaughlin). When Phyllis (Gina Tognoni) arrives, she’ll obviously recognize Andrew again. Phyllis will bring up the fact that he runs Genoa City Memorial’s DNA lab. She’ll wonder why he would be helping with a cosmetic company.

Jack will finally get fed up and offer to pay big bucks for Andrew’s secrets. He’ll be willing to give the guy 10 times what Ashley paid, but she’ll shut all this down. Ashley will reveal that Andrew was behind Jack’s paternity results. As Jack stands there in shock, Ashley will admit that he’s been John’s (Jerry Douglas) son all along.

Other Young and the Restless spoilers say Kyle (Michael Mealor) and Lola’s (Sasha Calle) romance will cause issues. Abby (Melissa Ordway) will give Kyle a hard time about dating Arturo’s (Jason Canela) sister, but she’ll ultimately get on board. Rey (Jordi Vilasuso) and Arturo will be tougher to handle.

After Rey finds out Kyle robbed a grave, he’ll share the news with his younger siblings. Naturally, Lola will rush to Kyle’s defense. She likes him, so she’ll date him if she wants to! Arturo and Rey certainly aren’t the boss of her.

Back with Phyllis, Y&R spoilers state that she’ll get another cryptic note. This one will state that if they don’t want anyone to find out what they did, it’ll cost them. Phyllis’ letter will indicate that 2 is the first digit. She’ll show it to Victoria (Amelia Heinle) and they’ll debate what will follow.

The Young and the Restless spoilers say Rey will sneak up behind them and push for info on their chat. Once Victoria gets rid of Rey, Phyllis will suggest that maybe he really did send the notes. A little later, Victoria will get a letter of her own. Another cover-up crew member must be getting the second digit since Victoria will get the third. She’ll read that it’s a 0 and look spooked by the growing threat.

Y&R fans won’t want to miss the twists and turns ahead in this storyline. We’ll give you updates as other details emerge. Stay tuned to the CBS soap and don’t forget to check CDL often for the latest Young and the Restless spoilers, updates and news.