BY Sean O'Brien on July 23, 2018 | Comments: one comment
Related : Soap Opera, Spoiler, Television, The Young and the Restless 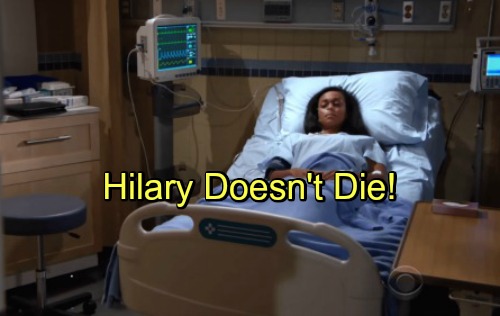 The Young and the Restless spoilers tease that Hevon’s wedding will happen, but not in the way that was expected. Maudlin, hospital bed nuptials will soon take place as Mishael Morgan’s (Hilary) write-out happens.

The thought of their recently, apparently artificially conceived baby dying doesn’t compute. No one would anticipate such a sad circumstance playing out. It’s creatively questionable that Y&R has opted to first kill off that unborn life and then to likely be setting up Hilary’s demise.

The choice to kill off Morgan’s character, if that is to happen, may make this actor’s potential comeback less likely. If both sides would have interest in an eventual reunion, Morgan would need be written as portraying a different alter ego. The wisdom of limiting her to that option is suspect.

Nate’s (Brooks Darnell) dire prognosis leads to Devon (Bryton James) wanting to marry Hilary because her life will seem to be limited to a handful of coming episodes. Having Morgan exit on that type of assumed ender would surely be memorable, which could reflect a belief by the actor and the show that Hilary’s time should end, regardless of whether Morgan returns some day.

Should Hilary fade into a comatose state after saying her marriage vows with Devon would make much more sense for Y&R and Morgan’s return possibilities. Let’s not forget that Mishael Morgan’s agent made it clear that a Y&R return was possible down the road. Y&R fans certainly remember Phyllis’s coma and her subsequent recovery.

Devon was away on business when he got the call. Hilary had been in a car accident and was critical.

Lily (Christel Khalil) drove through a red light and was broadsided, on the passenger portion of her car. Hilary was in the front section of the vehicle at the time, while Charlie (Noah Alexander Gerry) was in the back seat.

The tragic scene referenced above was put into motion when Shauna (Camryn Hamm) invited Charlie over to Hevon’s penthouse apartment. Well, it’s actually the apartment across from the penthouse that Neil (Kristoff St. John) recently bought. Often times a true penthouse encompasses an entire floor, rather than one side of a floor. But this technical point was inserted in a manner similar to Sharlie’s side plot, as it was intended to further the story.

Mattie (Lexie Stevenson) told her mom, after resisting, that Charlie wasn’t at a summer track team meeting, but instead was with Shauna. Lily bolted to Hevon’s living space, used her family key to open the door and found Sharlie in a state of undress.

Hilary arrived next. She and Lily engaged in a verbal battle while Shauna ran out to escape the drama. The three remaining characters followed, which led to the car scene, the loss of the baby, and Hilary’s seemingly dying state. CDL is a leading source for everything linked to The Young and the Restless. Check back regularly for Y&R spoilers and news!