BY Sean O'Brien on April 30, 2018 | Comments: one comment
Related : Soap Opera, Spoiler, Television, The Young and the Restless 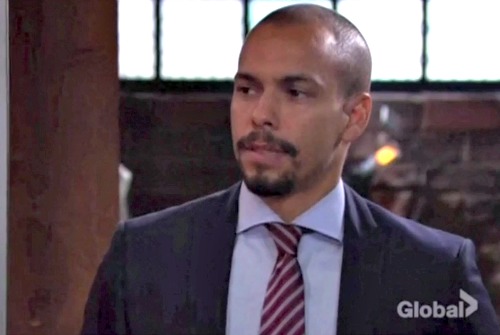 The Young and the Restless spoilers tease that Hilary’s (Mishael Morgan) plan to have herself artificially inseminated, using some of Devon’s (Bryton James) saved sample, will be successful. Mr. Hamilton won’t be aware of what’s happening and also won’t be swayed into a revived relationship once he learns the truth. Yes, Simone (Shanica Knowles) will stand in the way of Hevon Part II.

So Hilary took a home pregnancy test. The positive result she received promised a ninety-five percent correct rate. But in this instance, a chemical pregnancy occurred. That meant the public message Hilary offered about her perceived pregnancy on GC Buzz had to be rescinded, right?

Mariah (Camryn Grimes) and the rest of the staff arranged all of the baby swag that was received for the Hilary Hour host. The massive amount of merchandise surrounded the set while the co-host’s streamcast was live. Hilary couldn’t bring herself to say she wasn’t pregnant, which immediately caused all Hevon fans and its detractors to guess what was coming next.

Devon and Hilary previously created a legal contract. That Michael Baldwin (Christian Le Blanc) special set in stone a series of agreed upon conditions, which included information relating to the manner in which Hilary was to become pregnant. How their lives would play out after the birth wasn’t defined.

The former Hevon agreed to artificial insemination using Devon’s voluntarily supplied contribution. But the couple later consented to various mutual interactions that seemed to have created a baby, though that isn’t actually the case as only Hilary and her doctor knows.

Devon will clearly gain a legal right to sue for full custody if Hilary pursues her plan to use his sperm sample without his agreement. That assumes a conceived baby through the marvels of science and a birth. It also implies that the insemination procedure will work in short order, thus masking the non-conception that was just revealed. The eventual follow-up would deliver the reveal.

However, as fans recall, Lily (Christel Khalil) positioned the very appealing and far less dramatic Simone in Devon’s path. That wise plan is working, as Devon is developing a personal connection with Knowles’ character.

Hilary apparently believes that she’ll become pregnant through scientific means and that Devon will never learn the truth. She apparently hasn’t watched soaps.

Surely the truth will come out at some point. When it does, that, along with Devon’s justified feelings, and Simone’s existence will work against Hilary’s thinly veiled Hevon Part II revival plan. CDL is a leading source for everything linked to The Young and the Restless. Check back regularly for Y&R spoilers and news!