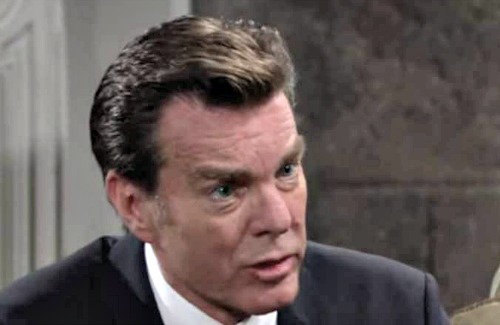 The Young and the Restless (Y&R) spoilers tease that Jack’s (Peter Bergman) paternity will come as quite a shock. This juicy secret will be exposed during May sweeps, so the drama’s definitely drawing near. More details are trickling in about that stunning moment and the devastating fallout, so let’s talk about a few of them.

For starters, we know that Jack’s paternity will be revealed in a very public way. When the truth comes out, several characters will play the blame game. The Abbott clan will be hurled into chaos, so everyone will resort to finger-pointing as they try to get a grip. Y&R fans can certainly expect some stunning showdowns.

The Young and the Restless spoilers say a special screening is planned, so that may tie in here. Dina’s (Marla Adams) loved ones can’t wait to watch her edited interview. It sounds like they’ll have a little party to celebrate those memories. Since parties always spell trouble on soaps, this is the perfect opportunity for Jack’s paternity bombshell.

Y&R buzz says that there’s a good chance Dina’s unedited interview will be played at this event instead. Will it be a heartbreaking mistake or an act of malice? Either option seems reasonable. It’s possible that Charlie (Noah Alexander Gerry) will goof and somehow provide the wrong footage as the final product. Abby (Melissa Ordway) could get blamed for that, too.

However, it’s equally possible that someone will intentionally spill the news. Jack might lash out at Ashley (Eileen Davidson) and accuse her of setting this up. He may think she’s seeking revenge since he threw her paternity in her face. Jack will probably insist it’s all a big lie, but the DNA confirmation will rock him to the core. This will obviously be a crushing blow.

Of course, Kyle (Michael Mealor) will get in on the conflict. Abby may think he’s responsible for the secret spillage. Kyle’s been snooping around, so he’ll inevitably end up on the hot seat. Billy (Jason Thompson) might even face accusations since he appears to have a power trip brewing. Jack may think Billy wants the throne for himself.

The Young and the Restless spoilers say this will turn into a huge mess for the Abbotts. Victor’s alliance with Kyle will insert him in the hostility as well. It’s clear that some May sweeps surprises are looming. We’ll give you updates as other Y&R details emerge. Stay tuned to the CBS soap and don’t forget to check CDL often for the latest Young and the Restless spoilers, updates, and news.