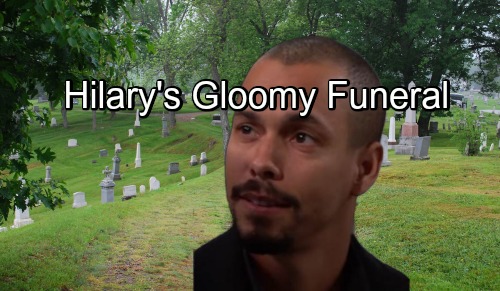 The Young and the Restless (Y&R) spoilers tease that Devon (Bryton James) will struggle in the days following Hilary’s (Mishael Morgan) death. He just won’t know how he’s supposed to let go and move on. Hilary was a huge part of Devon’s life for quite some time. He expected to build a family with her, but it was all ripped away thanks to a tragic crash.

Devon will face the worst pain he’s ever experienced, so Neil (Kristoff St. John) will try to stay strong for him. He’ll do his best to help Devon bear this pain. As for Lily (Christel Khalil), she’ll undoubtedly close herself off. Lily’s already guilt-ridden for being behind the wheel. When she inevitably learns she ran the red light, she’ll be in true agony over her actions.

For now, let’s focus on Devon and how he’ll cope. The Young and the Restless spoilers say Devon will distract himself with work. He’ll dive into projects at Hamilton-Winters and attempt to forget about his loss. It’ll be easier for Devon to ignore his grief than work through it.

Of course, Neil won’t think that’s a healthy way to deal with all this. He’ll push Devon to accept what he can’t change and mourn for what might’ve been. It’s the only strategy for closure. Nevertheless, Devon will resist anything that reminds him of Hilary’s death. He’ll even refuse to watch a special memorial episode of GC Buzz.

Neil won’t back off when Devon needs him most. He’ll respect Devon’s decision to skip the show, but he won’t let him miss out on the funeral. Y&R spoilers say Neil will convince the new widower to attend the gloomy service. Devon won’t like it, but he’ll promise to make an appearance and somehow try to survive this.

In the end, it should be the right decision. Funerals always bring sorrow, but they’re also an important part of the grieving process. Devon can hopefully have a good cry and remember fond memories. This could put him a step closer to healing, but upcoming revelations should blow that plan. Lily’s culpability is going to be a major issue!