BY Heather Hughes on November 22, 2018 | Comments: one comment
Related : Soap Opera, Spoiler, Television, The Young and the Restless 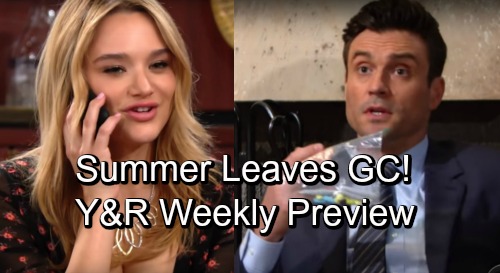 The Young and the Restless (Y&R) spoilers for the week of November 26-30 tease that boundaries will become a big issue on the CBS soap. For starters, Victor (Eric Braeden) will cross the line – at least in Nick’s (Joshua Morrow) opinion. “The Moustache” has been busy doing important work in Singapore, but it looks like he needs a little help. Summer (Hunter King) will get an enticing job offer soon enough.

Nick will object when he gets updates on Victor’s proposal. He’ll speak with his father via video chat to voice his complaints. Nick will suggest that Victor can’t just drag his daughter halfway across the world. He’ll shout until he’s so frustrated that he has to slam his laptop.

Summer had already been galivanting all over the place before she settled back down in Genoa City. She’s only been back in town a few months, so Nick won’t be pleased to hear she could be leaving again. Nick apparently doesn’t hold grudges. This is the same girl he had to pay to keep his cheating secret, but Nick loves Summer nonetheless. However, the fact that this is Victor’s doing may be the real problem!

The Young and the Restless spoilers state that Summer will accept the job, but will she actually go through with this move? If she does, she could be walking away at the worst possible time. Over with Lola (Sasha Calle), she’ll make her expectations known. Y&R’s weekly preview video shows Lola saying, “I’ve seen what sex does. I’m not going to change my mind about this.”

Kyle looks taken aback and a bit disappointed. Will he be hoping to take their relationship to the next level? Will Lola inform Kyle that it’s not happening anytime soon? Thanks to the whole situation with Arturo (Jason Canela), Mia (Noemi Gonzalez) and Rey (Jordi Vilasuso), Lola may be hesitant to hit the sheets early in a romance. She’s the kind of gal who sticks to her guns, so Kyle may be out of luck.

Unless, of course, Kyle wants to head over to Summer’s bed. He’s got an open invitation there! The problem is Summer’s not the one Kyle wants. Still, Summer might be able to change that if she hangs around long enough. It should be interesting to see if her job with Victor actually pans out.

Other Young and the Restless spoilers say we’ll see Devon’s (Bryton James) downward spiral. His grief is finally becoming too much to bear. Devon’s sister, Ana (Loren Lott), will arrive in town and she’ll immediately notice the changes in her brother. Ana and Nate (Brooks Darnell) will both reach out to stop Devon’s destructive behavior.

Unfortunately, Devon will just fly into a rage. He won’t let anyone tell him what to do or how to mourn. Cane (Daniel Goddard) will also confront Devon at some point. He’ll show Devon a bag of pills he found and insist that they need to talk about it. Devon may argue that he has everything under control, but Y&R could be gearing up for an addiction story.