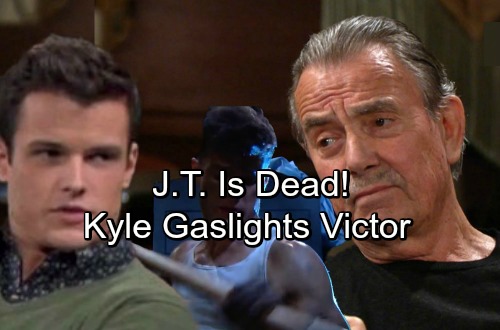 The Young and the Restless spoilers tease that Y&R wants viewers to believe that J.T. (Thad Luckinbill) is alive. But how can that be after what Nikki (Melody Thomas Scott) did to her third murder victim and then being buried in Chancellor Park?

Interestingly, Y&R has gathered all of its connected characters and their observers within the audience together. Nikki, Vickie (Amelia Heinle), Phyllis (Gina Tognoni), Sharon (Sharon Case), and all Y&R fans don’t actually know if J.T. is dead. Everyone thinks he is, but that’s not evidence, it’s conjecture.

Okay, so if the man who’s been using J.T.’s credit card and is seen on a security camera isn’t actually him, then what’s happening? Gaslighting has been used by people in the fictional and real world for generations. Purposeful mind manipulation that’s intended to make a target audience question it’s sanity.

In Genoa City, someone is trying to make the coverup crew doubt what they did. But that four-woman contingent seems to be the secondary target. The real aim is at one man, Victor (Eric Braeden).

Kyle Abbott (Michael Mealor), who’s not yet been confirmed as a member of the Chancellor family, has it in for Victor. That’s true because Mealor’s character remains enraged that the Moustache played him for a fool. Victor manipulated Kyle’s emotions, which gave him an excuse to fight his father, Jack Abbott (Peter Bergman), or whatever his last name will eventually be confirmed as.

Victor is believed to be the person who exposed Jack’s paternity problem at the movie house in the spring. Kyle is the only person who knows that Victor refused to give back the memory stick that contained Dina’s (Marla Adams) admission about John (Jerry Douglas) not being Jack’s biological father.

Dina’s reveal was not supposed to be in Charlie’s (Noah Alexander Gerry) final cut, but made it in because someone, likely Victor, paid someone to put it in. The Black Knight also showed up, uninvited, to witness the gathered crowd’s reaction that fateful night.

Savvy Y&R fans recall that Kyle apparently doesn’t have knowledge of J.T. being killed. So, he wouldn’t be using the coverup crew’s crimes against them. No, Kyle is targeting Victor without having told Jack, who once famously penned a bogus diary with Adam (Michael Muhney) that served to rake Victor once upon a time.

So, it appears as though J.T. is dead and that Kyle is either personally gaslighting Victor, with Vickie and the coverup crew merely being collateral damage, or Jack’s son is working with someone to make it look like J.T. is behind the Newman attack. CDL is a leading source for everything linked to The Young and the Restless. Check back regularly for Y&R spoilers and news!