The Young and the Restless Spoilers: J.T.’s Heart Gives Out, Dies In Final Faceoff With Victoria – Fate Of Cruel Abuser

BY Kinsley Goldman on March 26, 2018 | Comments: one comment
Related : Soap Opera, Spoiler, Television, The Young and the Restless 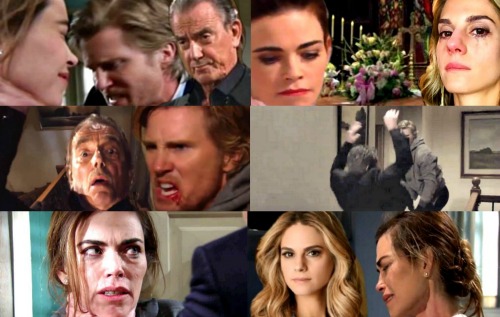 The Young and the Restless (Y&R) spoilers tease that J.T.’s (Thad Luckinbell) headed for trouble. It was bad enough when J.T. put Victoria (Amelia Heinle) through total emotional turmoil. He made a terrible situation even worse by trying to choke her in her own home.

Of course, J.T.’s brawl with Victor was awfully brutal as well. This obviously wasn’t a fair fight. Victor did pretty well for somebody who’s over three decades older than his opponent, but it wasn’t enough. J.T. hurled Victor down the staircase and really made Y&R fans hate his guts.

Unfortunately, J.T. still isn’t done! On Monday, The Young and the Restless spoilers say J.T. will see that Victor’s unconscious and exit anyway. He’ll walk right out and leave Victoria’s father there to die. J.T. will also hand over evidence of Victor’s price fixing to Paul (Doug Davidson), so he sure knows how to kick a man when he’s down.

After all of this, it’s clear that J.T. will have to pay the price for his actions. He’s gone to the dark side and there’s no turning back. J.T. seems beyond redemption at this point. He won’t be around long enough to repair all the damage, so there’s only one solution. J.T. will have to face his downfall and it’ll have to be a truly brutal blow.

Prison is certainly an option, but the CBS soap may have a worse fate in mind. The Young and the Restless spoilers say Victoria will have to find out the whole story eventually. She’ll inevitably learn that J.T. was working undercover behind her back.

Mac (Kelly Kruger) will also let Victoria know that J.T.’s a repeat abuser. That’ll definitely be a factor as this storyline moves forward. However, Victor’s ordeal should be the last straw. When Victoria discovers what Victor did to her dad, you can bet she’ll hit the roof.

Victoria may confront J.T. and call off their engagement. She could throw the ring in his face and insist that they’re over for good. Naturally, that would enrage J.T. and most likely bring on another attack. How’s this mess going to end? Perhaps J.T.’s heart issues will once again pop up.

There must be a reason Y&R planted that clue. The show must be laying the groundwork for something big. Will J.T. have a heart attack during his final faceoff with Victoria? Could she step back and leave him to die just like he left Victor? It would serve J.T. right after everything he’s done.

This could also mark a major shift for Victoria. She could take charge of her life again and show that she’s done being manipulated. Are you hoping Victoria will get her fire back? Do you think J.T.’s behavior will spark a deadly outcome? We’ll give you updates as other news comes in. Stick with Y&R and don’t forget to check CDL often for the latest Young and the Restless spoilers, updates and news.