The Young and the Restless Spoilers: J.T.’s Resurrection Teased – Redemption For Victoria’s Abuser?

BY Sean O'Brien on May 12, 2018 | Comments: Leave Comments
Related : Soap Opera, Spoiler, Television, The Young and the Restless 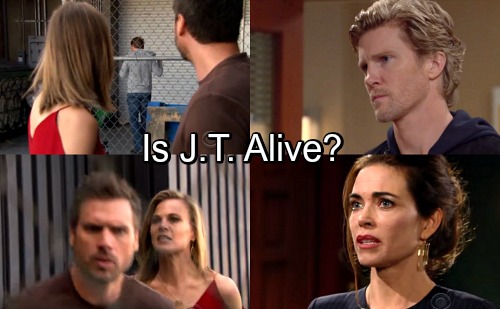 The Young and the Restless spoilers tease that J.T. (Thad Luckinbill) is alive. Really. Okay, it could be possible that a man who evidenced no pulse could have revived if he remained on the floor in Victoria’s (Amelia Heinle) bedroom. Alternatively, if, as Sharon (Sharon Case) suggested, the gang of four contacted the police, J.T. Hellstrom could have received medical treatment and may have lived. Instead, this character was written like a cartoon.

All human beings deserve to have their lives saved when possible, not just those who are deemed worthy. But that’s not what a dishonest mind, like Phyllis’ (Gina Tognoni) believes. As tenured Y&R viewers recall, she’s the unjailed criminal who attempted to murder Paul (Doug Davidson) and Christine (Lauralee Bell) years ago when Michelle Stafford played this character – not to mention her kidnapping of an innocent Adam Newman (Justin Hartley).

All who cheered Nikki’s (Melody Thomas Scott) act of hitting J.T. over the head claimed that the taking of that life was justifiable. In so doing, those misguided minds also are openly stating their belief that the length of other people’s lives is apparently up for debate. No use of any legal system is necessary. Anyone can become a vigilante, depending upon subjective circumstances, kill, and then should face no consequences if the mob sees them as acting for some supposed cause. Of course, all involved believe the mob will never come for them.

To all readers, all that was described above is the storyline Y&R is pushing. It’s not just a fictional story, but part of an ideological agenda. If some person (often portrayed as a J.T.), becomes physically, or even just verbal aggressive, then that person shouldn’t be restrained, or arrested, or forced to receive obviously needed medical treatment and serve whatever criminal time is deemed right by the courts. No, he (the J.T.’s of the world) should be killed.

Wrong. No man, or woman, should be thought of as inhuman. All who think that way are actually no different than the demons they see, or invent. In fact, they are worse because they believe they’re just.

This scribe will be shocked if the actual character Luckinbill portrayed, J.T., is somehow resurrected. If so, Y&R will prove the assertion of this article wrong. Here’s hoping that happens.

How would J.T. have survived being buried in a hole in Chancellor Park? He was under many feet of dirt and had no oxygen. J.T. couldn’t have survived and neither could any other human, man or woman. And all people, both men and women speak with equal authority on life at all times. Neither side holds higher ground because all who are alive represent life and the living.

Choosing to resurrect J.T. would turn Y&R into ABC’s classic Dark Shadows, or more recently, NBC’s Passions. Instead, possibly Luckinbill will be playing a look-a-like character who merely resembles J.T., is his unknown twin, or cousin. Maybe, it won’t prove to be Luckinbill at all, either.

The problem with Y&R’s so-called abuse storyline is that it purposely played into intentional emotions that have been stirred within western society in recent times. The current social agenda is to encourage people to not feel safe, including amongst their loved ones who could secretly be monsters.

People, in this instance viewers, are being encouraged to revisit the past and reconsider their own experiences and than report to the world whatever happened in reimagined terms. That’s not something people who live in democracies, or who are honest do. Legality, due process, and morality are thrown out the window by the reckless individuals who promote, or take part in this agenda.

All who challenge the mob are to be tagged as opposed to justice, when actually the intolerance of TPTB and their followers want to incite retribution. That request is infinitely reckless.

J.T. was poorly written into a monster. In actuality he became an intentional, one-dimensional version of himself. His devolution was explained as somehow related to loosely explained career problems, which proved that this character was being purposely slanted to promote an agenda.

Y&R is a great show, overall. However, it made a mistake in order to placate scapegoating and to encourage bad actions instead of democracy and real justice. Redemption is always possible, so here’s hoping this error is corrected. CDL is a leading source for everything linked to The Young and the Restless. Check back regularly for Y&R spoilers and news!