The Young and the Restless Spoilers: Jerry Douglas’ Y&R Return – Ghostly John Comes Back to Talk To Dina? 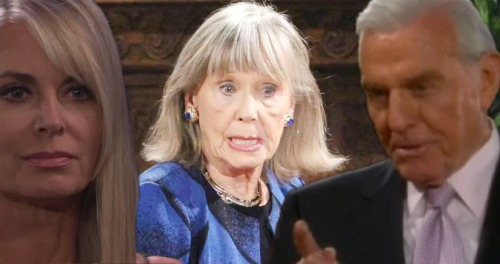 The Young and the Restless spoilers documented the epically messy Abbott family drama that appears to be ending. Ashley (Eileen Davidson) feels vindicated in having gained full patent rights over all Jabot products she’s created. But another question can be raised now that this reveal was dropped. Did Dina (Marla Adams) tell John (Jerry Douglas) about Ashley’s paternity?

Dina felt guilty. So, as the Abbott clan and Y&R fans know, she went to John and asked him to create something that would prove to Ashley that she was loved. But to think that Dina only shared her guilt with John, about having ran away from the family, seems debatable.

Using business to cover for personal failures is nothing more than a forced emotional shift, but in this instance also implies something else. John may have been told, or somehow learned who Brent Davis (Bert Kramer) really was.

Ashley and many other characters have long said that they were thankful that John always believed he was her biological father. That thought seemed to be the reason why Y&R hasn’t written John’s benevolent spirit into the show since Douglas was last seen in 2015.

In his otherworldly form, John would have become aware of the truth. Instead of addressing the open issue, Y&R chose to simply keep John away from the Abbott family.

Douglas, who turns 86 on November 12, last worked in 2016, appearing in a short The Final Show that wasn’t connected to Y&R, or daytime in general. So, it’s possible that he’s not able to perform at this point in his life. However, Douglas has commented publicly about wanting Y&R to write more for his character since he last recurred three years ago.

All of the above could also mean that the Heavenly edition of John is about to return. It would be immensely touching to see a scene between John and Dina. Yes, not John and Jack talking, but John and his one-time wife commiserating. That specific discussion would break new ground in Genoa City, based on past Jack-only conversations, and let the audience know what John and Dina actually discussed.

To give Ashley full patent rights on all that she created was a major decision to make. John surely had to know the power-potential he was signing over to his daughter and how that would impact the company, yet he still proceeded.

As long as Douglas is healthy and able to perform as John, why not have the Abbott patriarch come home? His reappearance would follow the wonderful Abbott flashback scenes that were recently presented, which enabled other actors to portray this legacy family in 1971.

It does feel possible that Y&R may have addressed Ashley’s write-out to Paris via this invented backstory method. But if that’s not the case, then John’s calming presence would certainly be welcomed by the audience.