BY hellodrdavis on October 28, 2018 | Comments: one comment
Related : Hot News, Soap Opera, Spoiler, Television, The Young and the Restless 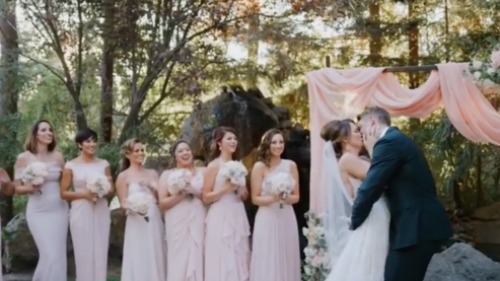 The Young and the Restless (Y&R) spoilers is pleased to pass on some happy news about a former Y&R star and his soap star wife. Justin Hartley, who portrayed Adam Newman on the CBS soap, and his wife Chrishell are celebrating their one-year wedding anniversary.

Justin Hartley, in addition to portraying Adam Newman on Y&R from 2014-2016, also portrayed Fox Crane on Passions. He currently portrays Kevin Pearson on NBC’s wildly popular This Is Us.

Viewers will remember Chrishell Stause Hartley from her roles as Amanda Dillon on All My Children and as Jordan Ridgeway on Days of Our Lives. Chrishell is set to reprise her role as Jordan on Days in early 2019.

The couple married on October 28, 2017 in an intimate and emotional outdoor ceremony at the Calmigos Ranch in Malibu. Of the occasion, Chrishell said, “They don’t make them any better than Justin, and I could not be more thrilled to officially be Mrs. Hartley!”

Perhaps the most touching aspect of the ceremony was that the couple included Justin’s 13-year-old daughter Isabella. Before reaching the altar, Chrishell stopped to embrace Isabella, who was both the flower girl and ring bearer. “She’s been such an amazing part of our relationship,” Chrishell said.

Justin’s This Is Us cast mates were in attendance at the nuptials, including Mandy Moore, Milo Ventimiglia, Chrissy Metz, Sterling K Brown, Chris Sullivan, and Susan Watkins.

Our congratulations and well-wishes go to the couple on their anniversary! Stay tuned to the CBS soap and don’t forget to check CDL often for the latest Young and the Restless spoilers, updates, and news.

5 years ago today I became the happiest girl in the House of Blues! Exactly one year ago from today was easily the best day of my life! I love you an impossible amount. Thank you for being you @justinhartley. 📽: @raynefilms ❤️