The Young and the Restless Spoilers: Kyle Conflicted – Stunned by Dina’s Admission, But Feels Compassion for Jack 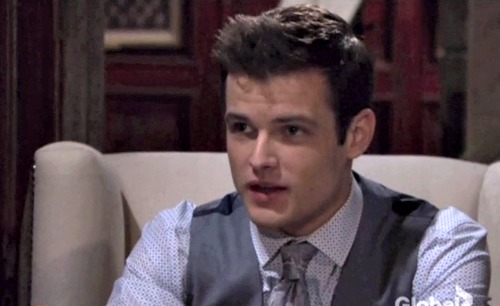 The Young and the Restless spoilers tease that Kyle (Michael Mealor) may come around yet. While he was committed to attacking his father, the junior Abbott man now has a decision to make. Continue to fight against his redefined family, or make amends by sharing the truth with his dad.

Learning that Dina (Marla Adams) had multiple affairs that resulted in Jack (Peter Bergman) not being John’s (Jerry Douglas) son is a mind-altering shocker. However, this genetic storm affects more than his father. If it’s true that Jack isn’t an Abbott, then neither is Kyle. That power point must be considered before Victor (Eric Braeden) gains and surely exploits said knowledge.

Prior to watching the video Ravi (Abhi Sinha) restored, Kyle felt his first pang of compassion for his dad. Jack was speaking about John in glowing terms. He then looked directly into Kyle’s eyes, as Abby (Melissa Ordway) was watching from the stairway, and told him that he wanted to be a better role model.

Kyle’s reaction shot was interesting. As his cousin looked at his face, Jack’s son put his head down and release an emotional breath. That was the first sign that Mealor’s character isn’t an android intent on destroying Westworld (a cross-promotional reference to HBO’s great modern series), instead of Genoa City. Meanwhile, Jack has no idea that his identity is about to be rebooted.

Abby was the first to hear Dina’s news. She learned the reality-altering information during one of the memory-saver recording sessions. Abby then immediately told her mother, Ashley (Eileen Davidson).

Jack’s recently estranged sister instantly reverted to sibling protection mode. Ashley was right to have a DNA test secretly conducted. Using unauthorized samples from Traci (Beth Maitland) and Jack allowed the truth to be confirmed discretely. However, Kyle’s find of the unburned memory stick could potentially upend everything.

Kyle’s irrational grudge against his dad must now be balanced by news that he also isn’t an Abbott. That changes calculations about what’s possible with Jabot.

Opting to conduct clandestine operations with Victor in past months obviously didn’t project well for Jack. But Bergman’s character learned what Kyle was doing when he viewed the contents of Victor’s hard drive, which seemingly offered a reset opportunity for this father-son combo.

Now that Kyle unexpectedly happened upon this major Abbott stunner, he’s gained the potential to do right by his father. Kyle must tell Jack what he’s learned. Doing so would fully restore trust between both Abbott’s, or whatever their last name will become.