The Young and the Restless Spoilers: Mackenzie Learns About Coverup Crew – Nikki Feels The Threat 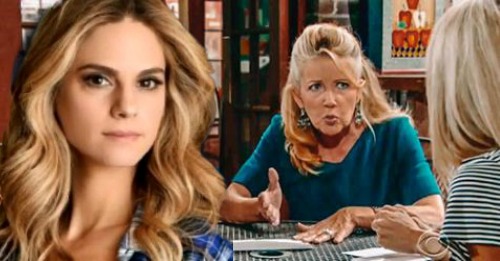 The Young and the Restless spoilers tease that Kelly Kruger’s (Mackenzie) upcoming return to the show will grease the J.T. (Thad Luckinbill) Dies storyline toward its ultimate climax. The moment the mother of Mr. Hellstrom’s two youngest children learns what really happened to their father she’ll become the coverup crew’s greatest threat.

You better be careful Mac, or Nikki (Melody Thomas Scott) will kill you too! Genoa City’s incredible three-time assassin, Mrs. Victor Newman, offed her father because she stated that he (a character who existed years before Y&R debuted) attacked her. She stated that Diane Jenkins (Maura West) attacked her as well. Both acts were therefore committed in self-defense.

Nikki will eventually inform Rey (Jordi Vilasuso) that J.T. was attacking Victoria (Amelia Heinle), which created the instinctive and deadly defensive reaction. However, this time a different type of deadly outcome happened.

The detail offered above proves that if a soap opera character endures long enough she, or he, will literally do anything more than once. Nikki’s third kill could easily result in jail time, not because of what happened, but due to her refusal to report the truth.

Y&R fans recall that Kruger reprised her role, for the first time in awhile, earlier this year. Mac tried to warn Vickie about J.T.’s demeanor change, which now feels like Y&R writing an old character back into the story to justify the long stretch of Mr. Hellstrom into an irredeemable monster.

Despite her sympathy for Vickie, Mac’s love for her children will create an unpredictable response. Plus, allowing knowledge of J.T.’s dead status to escape from the coverup crew’s squared circle will immediately put the quartet’s freedom in full jeopardy.

Vickie will attempt to play into Mac’s earlier demeanor. She push D.J. and Becca’s permanent safety having been secured due to what happened to J.T. Mac and J.T.’s children were referenced while off-screen, with one being shown as a baby during a video chat while Max Page (2009-2015) was portraying the younger version of Reed.

As for Sharon (Sharon Case) and Phyllis (Gina Tognoni), it’s hard to tell. Both characters share a common trait of being volatile, though neither would acknowledge this similarity that could lead to a reckless reveal.

As a side note, the earlier write-off of Reed (Tristan Lake Leabu) surely felt rushed. It was too inconvenient to have that character remain in town because J.T.’s son surely would have continued to question his dad’s deeply odd disappearance. The idea that Reed is rarely referenced also avoids what would be natural queries about J.T.’s current whereabouts. Though it would be intriguing if he reaches out to Mac, which then leads into this storyline’s ending.