BY Marcy Cohen on October 25, 2018 | Comments: one comment
Related : Soap Opera, Spoiler, Television, The Young and the Restless 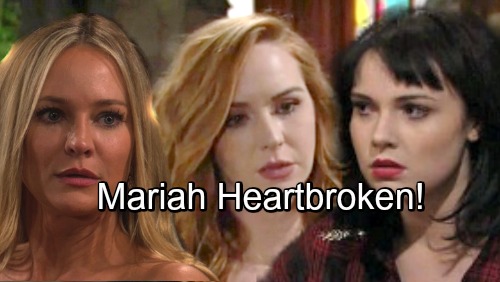 The Young and the Restless (Y&R) spoilers tease that secrets will become a huge problem for Mariah (Camryn Grimes). Of course, we’re talking about the secrets of the people she’s closest to. Both Sharon (Sharon Case) and Tessa (Cait Fairbanks) are deceiving Mariah in one way or another, so everything’s bound to explode eventually.

For starters, Sharon’s keeping Mariah in the dark on what really happened to J.T. (Thad Luckinbill). Mariah was too drunk to know what was going on that night, but her suspicions are revving up. Sharon and Phyllis (Gina Tognoni) are spending too much time together for Mariah’s taste. Her mom also panicked over Rey’s (Jordi Vilasuso) questions about Victoria’s (Amelia Heinle) party.

Mariah vowed to get to the bottom of this and that’s exactly what she’ll do. Whether she pries the shocker out of Sharon or finds a sneakier strategy, the truth’s going to sting. After all, Mariah was honest with Sharon about Nick (Joshua Morrow) and Phyllis’ (Gina Tognoni) hookup. She believes there’s a certain level of trust between them, so she’ll be disappointed when that’s not the case.

However, the bigger issue may be Mariah’s love life. She’s fallen hard for Tessa and she’ll tell her so soon. The Young and the Restless spoilers say an emotional admission’s coming up. Since Mariah got shot down last Halloween, we’re willing to bet this one will turn out far better for her. Tessa and Mariah’s Y&R romance will intensify, so it won’t be long until they’re moving in together.

Naturally, taking that step will come with complications. We don’t doubt Tessa’s deep feelings for Mariah, but she’ll inevitably sabotage herself. Tessa may not have lied exactly, but she’s most likely omitting crucial parts of her Canada story. The whole thing’s a bit sketchy. Plus, there must be a reason she erased the security tapes after the attack at Crimson Lights.

Does Tessa know the smugglers better than she’s letting on? Is the past she’s deemed so unspeakable tied up with them? Regardless, it sounds like Tessa’s history will cause drama in the present. The Young and the Restless spoilers say a major “Teriah” blowup’s ahead, so Tessa will have some work to do if she hopes to fix this.

Thanks to the brewing bombshells, November sweeps will leave Mariah a heartbroken mess! We’ll give you updates as other Y&R news comes in. Stay tuned to the CBS soap and don’t forget to check CDL often for the latest Young and the Restless spoilers, updates and news.