BY Sean O'Brien on September 17, 2018 | Comments: one comment
Related : Soap Opera, Spoiler, Television, The Young and the Restless 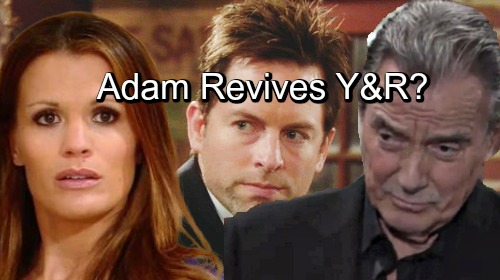 The Young and the Restless spoilers documented the on- and off-screen soap opera that involved Adam Newman, as played by Michael Muhney and then by Justin Hartley. As Y&R viewers witness a massive number of cast and storyline changes, one question strongly begs to be answered. Why Isn’t Adam Newman (as played by whoever) returning?

What better time to resurrect this twice-assumed dead man than now? Yet, executive producer and head writer Mal Young recently said that, while Adam could be alive, there were no current plans to bring the character back.

Television shows are about viewers, right? Solid, sustained, or even increasing ratings allow advertising rates to be maintained, or increased. This money matter is what commercial television is all about.

Adam wasn’t a source of interest until Muhney became Adam in 2009. He quickly made the role his own, generating significant support across Y&R’s audience. It was, is, and will be arguable that Muhney was the best actor on the show and possibly in all of daytime during his tenure that ended in December 2013.

Why was he fired at that time by then-executive producer Jill Farren Phelps? Well, it seems that Muhney’s ego caused too much disruption among some cast mates. Specific details have been provided by Muhney, but Y&R has never directly addressed the matter. That’s not unusual in the corporate world, as this soap remains an earner for TPTB and therefore is protected. The show itself is more important than any one person.

Muhney hired a private detective who claims to have located the source in Florida that initiated a rumor about him that has been circulating across social media for a number of years. That innuendo won’t be detailed here because doing so would constitute a smear, meaning a point that’s intended to damage someone’s reputation and is often not based upon facts. Said parties often work covertly, use dupes, and play off stereotypes to attack someone for a purposeful reason with the intent of negatively influencing public opinion longterm.

Whether Muhney’s name exists on an unwritten blackball list likely isn’t able to be confirmed. However, if this is true he would be in the same category as the great Victoria Rowell (Dru). She departed Y&R in 2007 and was later involved in a lawsuit against the company connected to the show.

Surely it’s a subjective opinion, but Rowell and Muhney rank with the top talent ever seen on daytime’s number one steamer. Y&R became and has stayed popular for decades because of many factors, with the actors clearly deserving significant credit in this regard. Yes, all behind scenes management and employes form part of a winning team, but the actors are the players on the field who the fans are cheering.

Y&R seems to have entered a risky moment in time. With various familiar faces leaving, new replacements will need to hit regular home runs in order to hold audience interest. Is that realistic?

Soap fans invest their time and emotions in familiar faces. New characters are given a chance, but a good deal of time is needed for them to bond with the audience even if these fictional personalities prove to be compelling.

So, the fans are seeing and will continue to see a vastly different show. Meanwhile Adam is nowhere to be found. Is that what the audience wants? CDL is a leading source for everything linked to The Young and the Restless. Check back regularly for Y&R spoilers and news!