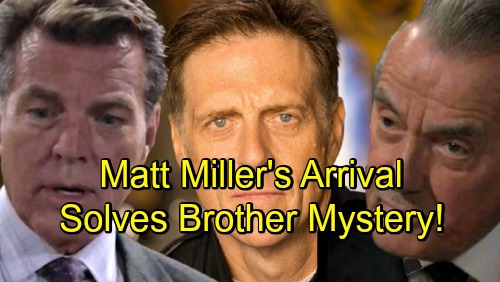 The Young and the Restless spoilers tease that Matt Miller’s (Richard Gleason) return to Genoa City feels rather ominous. The mystery of Jack’s (Peter Bergman) paternity is now being furthered by the theory that he, Victor (Eric Braeden), and Matt were fathered by Albert Miller (George Kennedy).

Matt was last seen in 2003, when he informed Victor that their dad was dying. The role of Victor’s originally only brother had then been reprised by Robert Parucha, who first played Matt in the mid-1980’s.

In September, 2018, Victor was naturally stunned when he recognized his father’s face in an old country club photograph that was being projected onto a digital screen by Mariah (Camryn Grimes). She was using an image Abby (Melissa Ordway) provided.

Abby told her uncle Jack that she would be glad to help him try to find information about his potential father. She then posted the picture on her social media account, which has over one hundred thousand followers and later successfully pitched the aforementioned idea to the new host of GC Buzz.

Seasoned soap fans know that Matt has obviously been written back into the show because of Victor’s head-drop. That refers to the instant classic reaction shot Braeden gave upon seeing his detested father’s mug. The contrast between one of Y&R’s many beautiful sets, that being in this instance the GC Athletic Club’s rooftop pool, and the mind-bending potential that Victor and Jack are brothers couldn’t be starker.

The potential of this storyline splash is breath-taking. Y&R might actually writing its two lead male characters genetically together. If affirmed through a conclusive DNA test and accompanying evidence, this storyline would rival all others as the boldest and most controversial in show history.

Matt’s last appearance established the loss of a family member. Mr. Miller’s return could well signal the realized expansion of his and Victor’s blood ties. However, business issues would appear to project as unable to be disrupted.

Jack would maintain his Jabot holdings, which aren’t affected by genetic ties to his late, presumed father John (Jerry Douglas). He also would stay linked to Nick (Joshua Morrow) at Dark Horse.

Newman Enterprises was not founded by Albert. Christian Miller changed his name, becoming a victorious (Victor) new man (Newman), and later started what has become one of the world’s leading conglomerates. So Jack, even if he’s recognized as Victor and Matt’s half-brother, would have no business claim to stake. No, this developing storyline centers upon a deeply intriguing personal issue.