The Young and the Restless Spoilers: Mia Pours Gasoline On The Fire – Rey and Arturo Head Towards Trouble

BY Sean O'Brien on November 20, 2018 | Comments: one comment
Related : Soap Opera, Spoiler, Television, The Young and the Restless 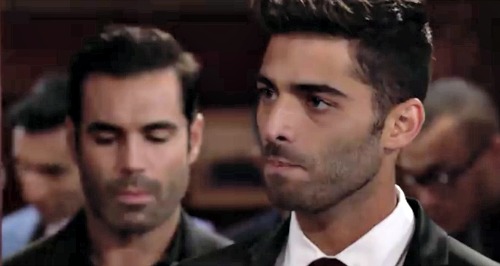 The Young and the Restless spoilers tease that Arturo’s (Jason Canela) loyalty to his current girlfriend and Abby’s (Melissa Ordway) preparation for battle will make for a strong tag team against Mia (Noemi Gonzalez). While Genoa City’s newest diva thinks the world of herself, she’ll find that one of her renewed targets and the so-called “cookie cutter blonde” both have game.

Arturo continues to tell Mia off. But she’s not inclined to listen, as her me-first personality type takes no for an answer zero percent of the time. The trademark snarky smile revealing underhanded intentions.

Gonzalez’ character has delivered as intended. She’s a disruptor, who is purposely shaking up many residents of the fictional town that she’s descended upon. But Mia is also poking targeted audience members in the gut, which makes her compelling.

The goal in writing a villain is to create an unloved soul. Sure, seasoned Y&R fans can see down the road, knowing that someday Mia could be softened, enabling Gonzalez to earn a Daytime Emmy Award nomination. Until then, her newly introduced alter ego will take aim at whoever she pleases, which currently includes Arturo, Abby, and that poor sap Rey (Jordi Vilasuso).

Kudos to the writing staff for creating a believable backstory. Mia’s first love was Arturo, but she married his brother and then when back to Canela’s character when all were living in Miami, Florida.

One look at Mia’s attitude and her electric physical appeal allows all observers to know how she upended the lives of people she actually doesn’t seem to care for. That’s the rub Abby faces in real time now, as this no-boundaries persona marks her human territory and couldn’t care less about the Abbott family legacy, or Arturo’s current feelings.

Rey’s problem is different, as he’s remained married to this woman. If he felt like Arturo, divorce, or a staked out separation would be Mr. Rosales’ goal. It’s not, as of now, and that’s sad.

Mia clearly is a manipulator. She uses deceptively earned emotional capital to keep the men she toys with close by, then plays one off the other. Competitive personality type A maxed out exponentially.

What is Rey to do at this point, as he loves his supposed spouse? He clearly can’t trust Mia, but has also convinced himself that he can’t let her go.

Y&R fans wonder if Rey and Mia’s recent romantic reconnect in the apartment that was created above Crimson Lights will lead to a pregnancy? If so, Rey will be linked to Mia forever. Whatever good would come from the new life they create would then be counterbalanced against the near certain misery Mia would cause indefinitely.

Maybe Rey will be aided by Arturo and Abby, or take cues from how they plan to fight Mia off. With whatever happens, daytime fans have been presented with one of GC’s more enticing characters. Gonzalez character is good soap.