BY Marcy Cohen on June 12, 2018 | Comments: one comment
Related : Soap Opera, Spoiler, Television, The Young and the Restless 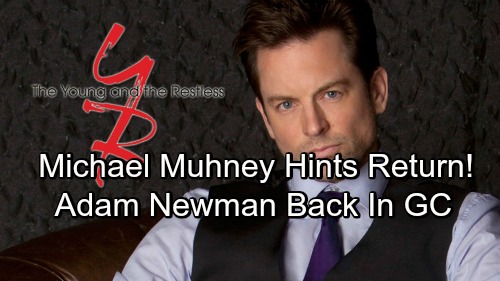 The Young and the Restless (Y&R) spoilers tease that some exciting news could be looming. Y&R fans know that Adam’s name has been brought up a lot lately. The show’s been tackling Nick (Joshua Morrow) and Victor’s (Eric Braeden) custody battle, so there have been several references to what Adam would want. Why not have Adam come back and set the record straight himself?

Justin Hartley is a big primetime star now and has no interest in returning to soaps. Michael Muhney, on the other hand, would love a Y&R comeback. In fact, a recent tweet could point in the direction of his return as Adam Newman!

Many Young and the Restless fans are constantly begging for a sign about Adam’s homecoming. People send Muhney messages about his old role on a regular basis. Perhaps that’s why Muhney decided to tweet out a little hint. “Fantastic things coming,” Muhney said. “Patience. Enjoy the ride.”

Could Muhney be headed back to the CBS soap as Adam? That’s certainly a possibility to consider. Muhney recently addressed a previous controversy involving Hunter King (Summer). Twitter users were sending King hateful tweets about accusations she allegedly made against Muhney. He claimed those accusations were false and urged everyone to stop all the backlash.

That could’ve been some preemptive damage control. The Young and the Restless might’ve known it’d be tricky having both King and Muhney back on set. Viewers would naturally wonder about behind-the-scenes drama. If nothing actually happened, it’s a good idea to make that clear now.

In the days following Muhney’s “fantastic things” clue, he sent out a couple more Adam-related tweets. One of them involved a reply to an oncology nurse, who talked about how Muhney’s portrayal helped a patient of hers. “This just made it all come home for me,” Muhney said. “Thank you. #Honored.”

Later, Muhney received another message from a fan. She suggested that he’ll “always be the one and only Adam Newman.” Muhney replied, “Getting so many tweets like this over the past 4 1/2 years makes all my work on that character worth every bit of rehearsal and execution.” He also thanked the viewer for connecting with his version of Adam “on such a deep level.”

If Muhney knows his comeback’s brewing, he could be trying to hype everyone up. Of course, that really isn’t necessary. Plenty of fans would be thrilled without any hyping. They’ve been waiting on Muhney’s Adam to return for quite some time.

Getting so many tweets like this over the past 4 1/2 years makes all my work on that character worth every bit of rehearsal and execution. Thank you, Jennifer. Thank you all for connecting with me and my Adam on such a deep level. ❤️ https://t.co/uEQEOtwikZ