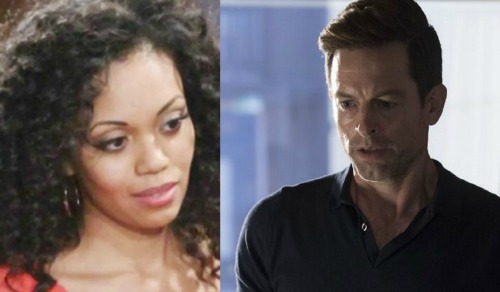 The Young and the Restless spoilers tease that Mishael Morgan’s (Hilary) surprise exit leaves a gaping cast hole. Rather than hire a new actor to play Miss Curtis, Y&R could opt to throw a red herring in the air instead.

The intent of such a move would be to shift viewer’s focus from one area of the show to another. Rather than recast the Hilary character and face exaggerated reactions from Hevon fans who form a digital protest march (without the need to physically do anything other than pound their smartphone keys), executive producer and head writer Mal Young could electrify soap land with one simple announcement.

Eric Braden (Victor), wait, no, Hunter King (Summer), yes, that would be so much better, will make the voice over announcement. “The part of Adam Newman will now be played by Michael Muhney.”

Oh, there are those who will cite unknown knowledge about Muhney and King, Muhney and Braeden, Muhney and their Aunt Tillie, or whoever. But ladies and germs negative gossip doesn’t square with the truth. While people propagated a cowardly lie that was invented by a blogger in Florida, as was confirmed by a private investigator regarding the Muhney and King rumor lie, reality lives on.

Morgan’s exit will push some Hevon fans away. Those who remain could even become angered if a potential recast is hired to play Hilary. Instead of doing that why not rehire Muhney to play Adam?

Scores of Y&R fans continue to clamor for the return of this incredible actor. He was interviewed for rehire in 2014, after being let go in December 2013. That event confirmed he’d done nothing wrong and also appeared to be a signal from TPTB at Y&R to the world affirming the point.

Allow the great work Morgan did for the past five years stand on its own. Doing so would also allow the stunning collaborative efforts with Bryton James (Devon) to remain alive via fondly preserved memories.

Don’t kill Hilary off, but simply allow her to leave town via believable circumstances, or some such thing. That would enable Y&R to hopefully reach a new contract accord with Morgan at some point in the future.

Shift viewer’s focus to something dramatic. Adam is found alive by Summer in the woods outside of GC! Yes, purposely having Adam’s niece find him would serve as a hard wink to all who spoke against Muhney, King, or both. All light-hearted souls would be in on the redemptive joke.

Adam is alive! Muhney returns in one of the great reprisals in Y&R’s history! Use the opportunity Morgan’s exit is allowing to make this happen! Three exclamation points within this paragraph? No, make it four! CDL is a leading source for everything linked to The Young and the Restless. Check back regularly for Y&R spoilers and news!