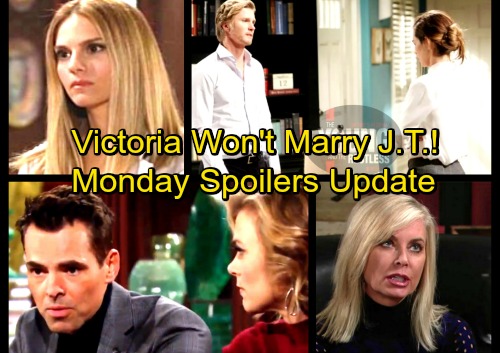 The Young and the Restless (Y&R) spoilers for Monday, April 2, tease that J.T. (Thad Luckinbell) will be anxious to tie the knot with Victoria (Amelia Heinle). He’ll promise to get his divorce finalized ASAP. Later, J.T. will try to reach a compromise with Mac (Kelly Kruger). He’ll suggest he’s willing to give her full custody of their children, but he’ll want visitation.

Mac will agree to that, but only if the visits are supervised. J.T. will suggest that he’s OK with that before turning her attention to the divorce papers. He’ll push Mac to sign them as soon as they’re ready. The Young and the Restless spoilers say Mac will express concern for Victoria. She’ll wonder why J.T.’s in such a hurry to marry again, but she’ll promise to sign the documents when they’re available.

At Crimson Lights, Mac will have a chat with Sharon (Sharon Case). She’ll mention J.T.’s abuse before Victoria walks in. After some tense comments are exchanged, Mac will head out. Y&R spoilers state that Sharon will gently bring up J.T.’s issues, but Victoria will argue that she wouldn’t let someone mistreat her. Since Victoria will stand her ground, Sharon will mention counseling as an option.

At home, Victoria will return to J.T. and drop a bomb. She’ll announce that she can’t marry him, so J.T.’s sure to be upset on Tuesday. In the meantime, Ashley (Eileen Davidson) and Abby (Melissa Ordway) will mull over Jack’s (Peter Bergman) DNA results. The test revealed that Jack (Peter Bergman) isn’t an Abbott, so they’ll argue about what to do.

Abby will think it’d serve Jack right to throw this in his face, but Ashley won’t like that idea. Despite all the blood-Abbott clause drama, Ash will want to protect her brother. She’ll suggest they don’t even know who Jack’s real father is. Ashley will feel like coming clean about this would change everything.

Other Young and the Restless spoilers say Phyllis (Gina Tognoni) and Billy (Jason Thompson) will give Jack a pep talk. When they stop by the jail visiting area, Jack will allude to the crumbling Abbott clan. Ashley’s been livid and Kyle’s (Michael Mealor) turned against his father. Dina’s (Marla Adams) memory issues have also been weighing on Jack. He’ll suggest that his family’s falling apart.

Phyllis will plan to find the true attacker, but Billy won’t want her in harm’s way. He’ll push for a private investigator instead. Billy will urge Phyllis to back off and let the pro handle it. He’ll think she’s getting caught up in another ex’s mess.

Phyllis will fire back that Billy’s been worried about Victoria’s relationship with J.T. He’ll acknowledge that he’s guilty of the same thing, so they’ll decide to focus on their own romance. Elsewhere, Devon (Bryton James) and Hilary (Mishael Morgan) will talk about their future kid. They’ll have sex once more to give Hilary a better chance of getting pregnant.

Across town, Mariah (Camryn Grimes) will defend Hilary and Devon’s baby goal. Lily (Christel Khalil) won’t be sorry that she tried to prevent it. Suddenly, they’ll both get texts about Devon and Hilary being late for work. It won’t take Mariah and Lily long to figure out what went down!

Y&R spoilers hint that a great episode’s on the way. We’ll give you updates as other news comes in. Stay tuned to the CBS soap and don’t forget to check CDL often for the latest Young and the Restless spoilers, updates and news.