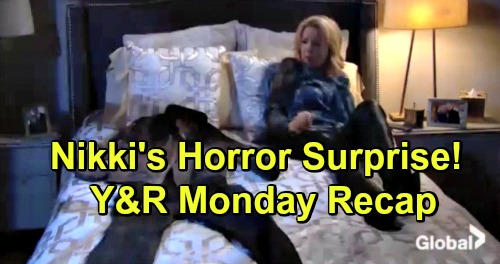 The Young and the Restless (Y&R) spoilers for Monday, December 10, tease that Tessa (Cait Fairbanks) will be rattled as she’s transported in a car. She’ll still have the black bag over her head as she begs for mercy. Tessa will rant the deal was supposed to be she’d pay the money and Crystal (Morgan Obenreder) would be kept safe. She’ll assume the thugs are back to cause more trouble.

Once the bag’s removed, Tessa will see that Victoria (Amelia Heinle), Nikki (Melody Thomas Scott) and Sharon (Sharon Case) are the culprits. Nikki and Victoria will take the lead on the accusations. They’ll suggest that Tessa planted proof to set Victor (Eric Braeden) up, but Tessa will deny it. She’ll point out that she doesn’t have a death wish, but the Newman women won’t be convinced.

Sharon will argue that Tessa doesn’t seem to know anything else. She’ll think maybe they’re done here, but Nikki and Victoria will do another round of grilling. After Tessa’s a full-blown mess, they’ll ultimately decide she’s innocent. Tessa will be untied and tossed out of the car with her phone. She’ll be left in the woods, but Victoria will snap that she’s very resourceful.

At Crimson Lights, Mariah (Camryn Grimes) will grow impatient over Tessa’s delay. When Lola (Sasha Calle) pops in, they’ll start talking about relationships. Mariah will confess that she’s about to break up with Tessa, but it’s going to be tough. She’ll note that Tessa touched her soul and she hasn’t felt that before.

After Lola takes off, The Young and the Restless spoilers say Mariah’s phone will ring. Tessa will be sobbing on the other end, so Mariah will track her phone and vow to come get her. When she arrives, Mariah will embrace Tessa and take her back to her car. Tessa will admit that Victoria and Nikki snatched her, but she’ll leave Sharon’s name out of it.

Y&R spoilers say Tessa will blame herself for being an awful person, but Mariah won’t believe that. She’ll tell Tessa she was going to end things tonight, but she can’t let her go. Mariah will promise she’s not going anywhere, give Tessa a kiss and hold her as she cries.

In Rebekah’s suite, Phyllis (Gina Tognoni) will burst in and stop the plan. She’ll explain that Nick’s (Joshua Morrow) off-limits and reveal what they were up to. Rebekah won’t be happy about their shady tactics, but she’ll still approve the deal. She’ll sign the papers and leave with her luggage soon after.

At the Abbott mansion, Billy (Jason Thompson) talk to Jack (Peter Bergman) about his relationship with Phyllis. He’ll hint that they might be getting back together, but Jack won’t seem convinced. Later, Phyllis will summon Billy for a meeting at the athletic club. She’ll admit that Nick thinks she’s at the office.

Billy will be ready to start over, but Phyllis just won’t think she can do that. She’ll mention Summer (Hunter King) and how certain things you just can’t take back. Phyllis will point out that she’s committed to Nick now and assure Billy that what they had is over.

Other Young and the Restless spoilers say Nikki will opt to sleep in her own bed after all the kidnapping drama. She’ll leave Victoria’s place and head home to get some rest. When Nikki feels uneasy, she’ll switch on the light to find the clothes J.T. (Thad Luckinbill) was buried in. This dirty discovery will leave Nikki screaming as she freaks out.