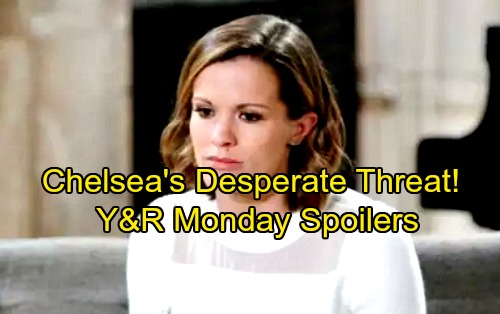 The Young and the Restless (Y&R) spoilers for Monday, February 5, tease that Chelsea (Melissa Claire Egan) will start to panic. She’s been doing everything she can to cover her tracks, but things are quickly spiraling out of control. J.T. (Thad Luckinbell) is digging deep and that’s going to spell trouble.

In Friday’s episode, February 2, J.T. links an alias to the bogus Chelsea 2.0 site. After a bit more research, he finds out that “Alexandra West” has a bank account. Naturally, that’s the fake name Chelsea’s using. She withdraws all the funds and closes the account, but it’s too late to avoid detection. The Young and the Restless spoilers say J.T. will close in on the truth!

On Monday, Chelsea will face additional obstacles. Y&R fans can expect her to deliver a fierce threat to someone. Could it be Jordan (Darnell Kirkwood)? He’ll return during the week of February 5-9, so maybe he’s already teamed up with Chelsea. If he’s been working behind the scenes, Jordan might make more demands. He could vow to expose Chelsea’s scheme if she doesn’t cooperate. 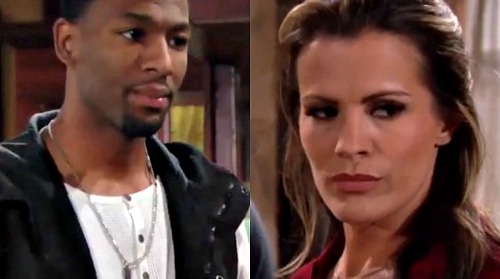 Chelsea might argue that if she goes down, she’s taking Jordan down with her. She could do her best to keep him in line. Of course, there are other options. At some point this week, J.T. will make a surprising discovery. He’ll believe he knows who’s to blame for all the Chelsea 2.0 mayhem.

Will J.T. out Chelsea in front of Phyllis (Gina Tognoni) and Lauren (Tracey E. Bregman) or give her a chance to explain? If it’s the latter, Chelsea might come up with a strategy to silence J.T. – at least for now. He could be the threat recipient. Whatever the case, Chelsea will show off her nasty side soon enough.

Other Young and the Restless spoilers say Ashley (Eileen Davidson) will tackle corporate chaos. She traded Jabot’s problems for Newman issues! Ashley will realize she can’t escape the drama of a power struggle. It sounds like Victoria (Amelia Heinle) may fight back in a big way. She has no intention of letting Ashley walk all over her.

Nevertheless, Ashley won’t give up on her goals. She has major plans for Brash and Sassy as well as several other divisions. Y&R viewers will see Ashley take charge of the situation and stand her ground. We’ll give you updates as other news comes in. Stick with the CBS soap and don’t forget to check CDL often for The Young and the Restless spoilers, updates and news.