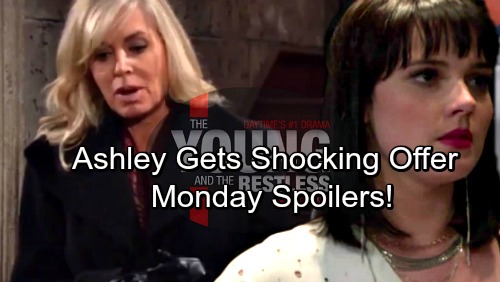 The Young and the Restless (Y&R) spoilers for Monday, January 22, tease that Ashley (Eileen Davidson) will get a startling proposal. It’s possible that Michael (Christian LeBlanc) will offer to defend Ashley against murder charges. Michael’s help wouldn’t be startling, but the fact that Ashley’s fighting the accusations would be.

Of course, this may not even be a real issue. Ashley was with Jack (Peter Bergman) at the time of the attack on Graham (Max Shippee). He can back up her whereabouts. Plus, Graham wore gloves when he came after Dina (Marla Adams). That lines up with Ashley’s claim that she was framed. Graham obviously wanted to preserve the fingerprints on the syringe.

Unless Paul decides to be a complete moron, he’ll probably just drop this pretty soon. Perhaps that means Ashley will get a different kind of proposal. Could this involve Jabot? Jack might decide that after everything they’ve been through, they’d be better off as co-CEOs. It seems silly that they haven’t chosen that alternative already.

Jack could also propose a new plan for Dina’s care. Regardless, Ashley will have a big decision to make. At some point in the week ahead, Ashley will show she’s a true force. Maybe this will tie in with some Y&R corporate drama. Ashley’s quite capable of handling company issues, so Jack would be wise to let her pitch in.

Elsewhere, Mariah (Camryn Grimes) will continue to fume over Tessa’s (Cait Fairbanks) betrayal. Tessa has really put Mariah through the wringer over the last few months. She toyed with Mariah’s emotions, rejected her, stole her journal and put her words in a new song.

Mariah will decide she’s had quite enough! Tessa will eventually reach out to Mariah and try to smooth things over. She’ll insist she was desperate and grabbed the journal in a panic. Tessa will be sorry that she hurt her again, but Mariah won’t want to hear excuses and apologies. She’ll give Tessa the cold shoulder, so Devon (Bryton James) will have to intervene later in the week.

Unfortunately, even Devon may not be able to do much. It’s going to take a lot more than a conversation to help Tessa and Mariah make peace. The Young and the Restless spoilers say Tessa will pour her heart out in ways she didn’t expect. Stick with Y&R to see if her bold plan pays off.