BY Heather Hughes on October 12, 2018 | Comments: one comment
Related : Soap Opera, Spoiler, Television, The Young and the Restless 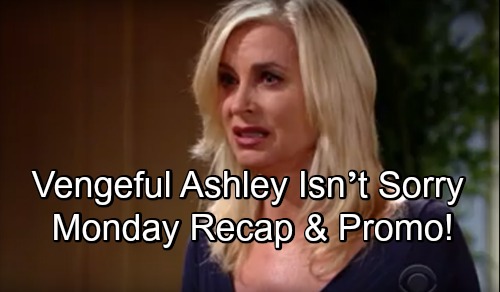 The Young and the Restless (Y&R) spoilers update and recap for Monday, October 15, tease that Nikki (Melody Thomas Scott) will get another piece of the puzzle. Her note will reveal the final three digits of the blackmailer’s total. She’ll get “000” in her note while Sharon (Sharon Case) opens hers to reveal a “5.”

The cover-up crew will put all that together and realize they owe $250,000 if they want their secret kept under wraps. Nikki will resolve to just pay it and put this behind them. Sharon will back her up, but Phyllis (Gina Tognoni) won’t think that’s a good idea. Victoria (Amelia Heinle) will agree with Phyllis on this. What’s to stop the blackmailer from coming back for more?

Besides, the notes don’t actually spell out what the secret is. What if he or she doesn’t actually know the J.T. (Thad Luckinbill) details? This could just be a scare tactic for cash. Phyllis will think they should send a message of their own and ask to meet in person. She’ll hope maybe they can lead to this person’s arrest.

At Jabot, Jack (Peter Bergman) will send everyone else out of the office. He’ll want to confront Ashley (Eileen Davidson) about her actions alone. Jack will think Ashley needs to apologize for deceiving him about his biological father. She’ll insist that Jack deserved it and share all the reasons why.

Ashley will remind Jack that he put the blood-Abbott clause in place and used it against her. She’ll snap that he even teamed up with Victoria to frame her at Newman. Ashley will have a meltdown and rant about always having to be the nice one. This was her chance to be as cruel and manipulative as Jack.

The Young and the Restless spoilers say Ashley will explain how it all went down. She exploited Dina’s (Marla Adams) Alzheimer’s and convinced her she had another affair. That admission will absolutely horrify Jack. He won’t even recognize the person Ashley’s turned into.

Ashley will also admit to setting up the DNA test deception. She even made sure Dina’s confession was edited into that documentary. Ashley will confess that she couldn’t resist making a splash with the news. She’ll think the look on Jack’s face was worth all the trouble she went to.

Jack will bring up his downward spiral, his drinking and the pills he almost took. Ashley will protest that she didn’t think his grief would run that deep. She’ll admit she planned to tell Jack the truth around the holidays, but he’s getting his gift early. Ashley will smugly wish Jack a merry Christmas, so he’ll become even more enraged.

Jack will think Ashley’s a monster for doing this to him. He’ll snatch her nameplate off the door and contend that John (Jerry Douglas) would be appalled. Jack will ultimately pick up a chair and hurl it through the glass nearby, which will elicit a yelp from Ashley.

Other Y&R spoilers say Traci (Beth Maitland), Abby (Melissa Ordway) and Kyle (Michael Mealor) will be in shock. They’ll gripe about Ashley’s actions at the Abbott mansion, but Traci won’t want this to tear their whole family apart. She’ll think now’s the time to stick together.