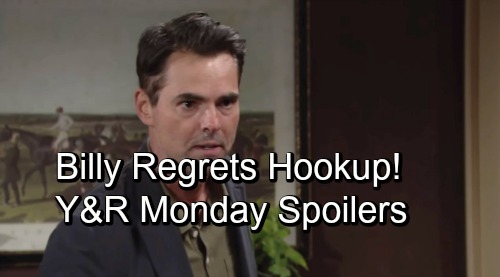 The Young and the Restless (Y&R) spoilers for Monday, October 8, tease that Ashley (Eileen Davidson) will feel like celebrating. She’ll apparently have a good reason to, so what’s this all about? It has to involve Ashley’s attempt to take the Jabot throne. She could be one step closer if Traci (Beth Maitland) comes through on her promise.

Traci seemed a bit overwhelmed at the thought of taking charge. She doesn’t really have the experience or qualifications necessary for the job. That’s why she plans to pass the baton as soon as possible. However, Traci intends to take this position seriously in the meantime. She warned Ashley that she was no one’s puppet, but it sounds like she’ll stick to their goal anyway.

If Ashley wants that CEO spot, she needs to get the blood-Abbott clause removed. Traci may call a board meeting and get the ball rolling. It was a dumb idea on Jack’s (Peter Bergman) part anyway. He can certainly see that now. An Abbott’s an Abbott, no matter whose blood is running through his or her veins.

This family needs to be coming together, but more chaos will hit instead. Despite Monday’s celebration, Y&R spoilers say a shocker will change everything for the Abbott clan. Will this involve Jack’s paternity? What about Traci’s? It’s possible Ashley had a hand in rigging the DNA tests, so stay tuned for some bombshells later in the week.

For now, Billy (Jason Thompson) will assess his train wreck of a life. There’s a good chance we’ll see some regrets after his hookup with Summer (Hunter King). It’s clear that Friday’s sex session was really about getting back at Phyllis (Gina Tognoni).

Will Summer blab right away or will this kick off another huge secret? She has the power to break her mother’s heart, so she’ll have to decide how cruel she wants to be. Billy’s desires could be a factor in what Summer chooses – at least for now. Nevertheless, The Young and the Restless spoilers say the news has to get out eventually.