The Young and the Restless Spoilers: Friday, October 5 Update – Billy Dumps Phyllis, Hooks Up with Summer – Sharon Kicks Nick Out 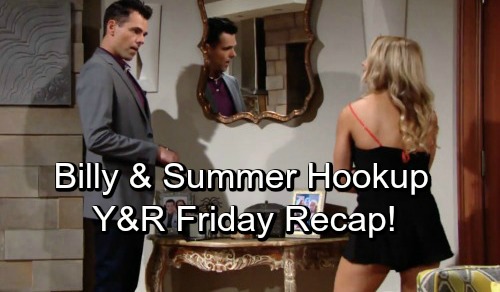 The Young and the Restless (Y&R) spoilers update and recap for Friday, October 5, tease that Sharon (Sharon Case) and Billy (Jason Thompson) will have a few things to get off their chests! Thankfully, Tessa (Cait Fairbanks) will rush Faith (Alyvia Alyn Lind) out before she witnesses any more damage. As for the rest of the wedding guests, they’ll have to hear all the ugly details.

Sharon will snap about all the lies as Billy gets riled. When Phyllis (Gina Tognoni) insists it was during their break, Billy won’t be pacified. He’ll argue that they were only apart for two days. Sharon will pipe up that all it took was one night for Nick (Joshua Morrow). He’ll stammer out apologies, but Sharon will give him a hard slap in return.

Billy will praise Sharon for taking her shot at Nick and add that he’s next. Before he can throw a punch, Jack (Peter Bergman) will pull Billy back. The minister will finally put an end to this madness. He’ll order everyone out of the church, so some separate confrontations will begin elsewhere.

At the cottage, Sharon (Sharon Case) will insist that Nick needs to leave. Mariah (Camryn Grimes) and Noah (Robert Adamson) will think they need to talk instead. They’ll be appalled by Nick’s betrayal, but they won’t be happy about Sharon’s stunt either.

Once they’re given some privacy, Sharon will rip into Nick again. He’ll think they can fix this, but she won’t see how. Sharon will argue that there just can’t be a next time for them. She’ll refuse to keep putting herself through all this pain.

Over with Mariah and Noah, they’ll discuss all the “Shick” drama. Mariah will hate that it all blew up, but Noah won’t blame her for telling Sharon the truth. He’ll confess that he would’ve done the same thing in her position.

Next, Mariah will bring up the tricky topic of Tessa. Noah will worry that Mariah’s going to get hurt like he did, but she’ll suggest that their relationship is different. Since Mariah’s happy, Noah will suck it up and wish her the best.

At the Abbott mansion, Billy will shut down Phyllis’ apology attempt. He’ll insist that it’s over and demand that she get out of his life. An emotional Phyllis will end up drinking in a hotel room alone. She’ll contemplate calling Billy, but he’ll be preoccupied. The Young and the Restless spoilers say Billy will get in touch with Summer (Hunter King) for a chat…and something more.

Billy will contend that Summer was right about him wanting her. He’ll put a hand on her thigh and wonder if she’d like to take this back to her place. Billy will suggest that he can do what he wants now, so the ball’s in her court. Naturally, Summer will take Billy up on it. Y&R fans can expect a steamy Summer and Billy hookup back at her apartment.

At home, Mariah and Noah will enter the war zone with Faith. Fortunately, the situation will have settled a bit. Sharon will be sorry for what she put Faith through earlier. When the kid asks what’s next, Nick will come downstairs with his bags packed. Faith will rant about how her parents ruined everything just like she predicted.

As Nick turns to go, he’ll assure Sharon that this isn’t the end. Nick won’t plan on giving up, but Sharon seems pretty done. Is “Shick” over for good? We’ll give you updates as other Young and the Restless news comes in. Stay tuned to Y&R and don’t forget to check CDL often for the latest Young and the Restless spoilers, updates and news.