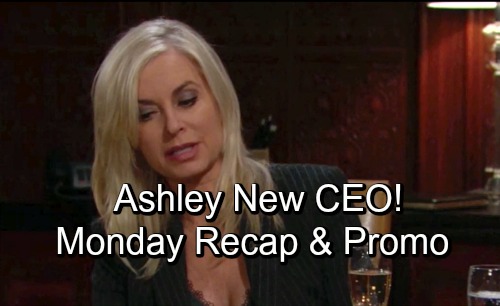 The Young and the Restless (Y&R) spoilers update and recap for Monday, October 8, tease that Phyllis (Gina Tognoni) will drag herself to work. She’ll want to honor her commitment to Fenmore’s, but she’ll obviously been feeling pretty rough. Ashley (Eileen Davidson), Traci (Beth Maitland) and Lauren (Tracey E. Bregman) will all think it was awfully gutsy of Phyllis to show up.

Traci will fear that Billy’s off spiraling out of control somewhere. Fortunately, Ashley will get updates on Billy’s rehab check-in. At Summer’s (Hunter King) place, she’ll wake up in bed alone. The Young and the Restless spoilers say Summer will grab her phone and send Billy some texts. She’ll hope he’s interested in another night together. Summer will suggest that she can’t wait to see Billy again.

At Dark Horse, Jack (Peter Bergman) and Abby (Melissa Ordway) will discuss all the wedding chaos. Nick (Joshua Morrow) will arrive to do some work, but he’ll end up getting a stern lecture from Victoria (Amelia Heinle). She’ll be appalled over the cheating, but Nick will offer the same old excuses. He’ll ultimately leave to track down Sharon (Sharon Case) and fix this.

Other Y&R spoilers say Mariah (Camryn Grimes) will get ready for a location shoot. She’ll have to be away for a week, so Tessa (Cait Fairbanks) will treat her to a goodbye dinner at the athletic club. When Mariah brings up the money she owes, Tessa will get a bit snappy. However, she’ll quickly settle down and insist that she just wanted to do something special.

Mariah and Tessa will share a tender moment, but Phyllis will burst their romantic bubble. After Kyle (Michael Mealor) reveals how Sharon found out, Phyllis will rip into Mariah for derailing the nuptials. The Young and the Restless spoilers say Mariah will defend her actions. She’ll argue that Sharon had every right to know, so Phyllis should just grow up.

At the police station, Sharon will inform Rey (Jordi Vilasuso) that the wedding didn’t happen. She’ll contend that forgiveness is only possible so many times. Nick will arrive and get Sharon riled up again. He’ll ask Rey to talk to her, so the detective will give it a shot. Nevertheless, Sharon will insist that it’s time for her to move on.

Back at the athletic club, Nick and Phyllis will bump into each other. Sharon will spot them, so it’ll spark another confrontation. They’ll insist that they didn’t plan this, but it won’t matter to Sharon. She’ll blast Phyllis for her part in the betrayal and remind Nick that it’s over.

Over with Victoria (Amelia Heinle), she’ll receive a spooky note. It’ll reveal that someone knows what she did and intends to make her pay. The rest of the cover-up crew will get messages soon as well. It sounds like big trouble’s brewing, but they’ll all do their best to handle the drama.

At Jabot, there’ll be a board meeting to get rid of the blood-Abbott clause. Once that’s taken care of, we’ll see a vote on the new CEO. Both Jack and Ashley will be up for the spot, but the vote will be tied at 3-3. Jack will decide he’s content at Dark Horse, so he’ll let Ashley know she’s earned the throne.

Ashley had better enjoy the power while it lasts! Her world will come crumbling down in the near future. We’ll keep you posted as other Y&R news comes in. Stay tuned to the CBS soap and don’t forget to check CDL often for the latest Young and the Restless spoilers, updates and news.