BY hellodrdavis on October 5, 2018 | Comments: one comment
Related : Soap Opera, Spoiler, Television, The Young and the Restless 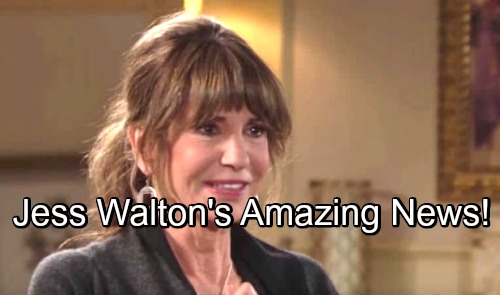 The Young and the Restless spoilers has some great news to pass along about the spouse of a beloved Y&R star. Jess Walton, who portrays Jill Abbott on the CBS soap, recently shared news on her husband’s recent and successful surgery on Facebook. He had suffered a malignant tumor in his neck and had surgery to remove it.

Jess posted a photo of her husband in his hospital bed along with this message: “To all my friends out there…Great news! My husband had a malignant tumor in his neck for the last year and we finally decided to come down to UCLA in Los Angeles and we had it removed. The doctor said it was a huge success! We thank God for all our family and friends’ prayers…just had to share this with you all.”

This is great news for Jess and her husband, John James. John is an author and founder of the Grief Recovery Institute, which is headquartered in Sherman Oaks, California. The organization disseminates information about grief and recovery from the impact of death, divorce, highly publicized national tragedies, and other emotional losses.

Jess frequently posts photos and updates about John and her family on social media, and she’s received an outpouring of well-wishes and support in response to her post about John’s surgery. Many of her followers have thanked Jess for her update and are wishing John the best in his recovery.

Jess has portrayed Jill Abbott on Y&R since 1987, and also appeared on the daytime drama Capitol from 1984-1987. She recently appeared on canvas for a brief visit to Genoa City, which she makes from time to time.

We wish Jess and John the best as John recovers. Stay tuned to the CBS soap and don’t forget to check CDL often for the latest Young and the Restless spoilers, updates, and news.