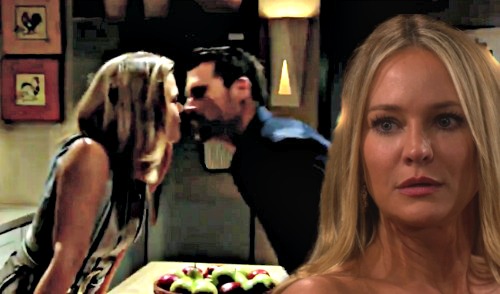 The Young and the Restless spoilers tease that Sharon (Sharon Case) won’t be as devastated as when she first learned that Nick (Joshua Morrow) cheated with Phyllis (as then played by Michelle Stafford) in the mid-2000’s. But she will be convinced that Shick needs to end after learning that those two were at it again while Shick was supposedly committed.

Gina Tognoni has offered a different version of Phyllis since joining the cast in 2014. She’s been softer, which made the recent hook-up with Nick unusual.

Interestingly, as is just playing out, Phyllis has been seen with Jack in numerous scenes. She’s actually using him in a similar sounding board role as she did with Billy when Phack was disintegrating.

It’s not that people don’t do what Phyllis is doing; confiding in a significant other’s family member. But most people don’t switch romantic partners from one sibling to the other and then, seemingly back again. Though this is Genoa City, so there’s that.

However Sharon learns, or is told, about Nick’s impulse dalliance she’s sure to be enraged, disoriented, and then determined. Today’s version of Case’s character, while still played by the same outstanding actor, also behaves differently than she did years ago.

Sharon has thankfully been written as a stable human being, which is reflective of so many people who deal with their mental health challenges in life. Kudos to Y&R for keeping that part of this storyline going. Hopefully that holds indefinitely.

As the owner of Crimson Lights and the owner of the cottage, Sharon doesn’t need Nick’s hand to hold her up. She wants to hold his hand in love. But Nick is currently, purposely transforming into some alternate version of his father, though he believes that’s not happening.

An assumed dissolved Shick would either send Nick to Phyllis, unless she’s back with Jack, or involves herself with both men (again). In any instance, Nick would have another point of contention to play off as he builds Dark Horse.

What happens to Christian (Jude and Ozzy McGuigen) at that point would be anyone’s guess. Who knows, maybe Adam (as played by a returned Michael Muhney) would come back to claim him? But that hoped-for arc revival, among Y&R’s hardcore fans, isn’t the issue Sharon or Nick will likely face first.