The Young and the Restless Spoilers: Nate Sets Hilary’s Exit Catastrophe in Motion – Crushing Moments Ahead for Devon

BY Heather Hughes on July 4, 2018 | Comments: one comment
Related : Soap Opera, Spoiler, Television, The Young and the Restless 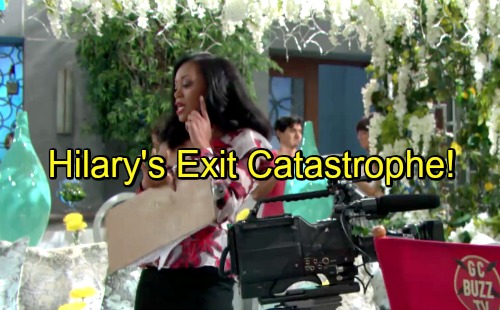 The Young and the Restless (Y&R) spoilers tease that Hilary (Mishael Morgan) could be setting herself up for major trouble. She recently met Nate (Brooks Darnell) and they sparred right off the bat. Hilary doesn’t appreciate rude strangers. She’s rude enough for all of Genoa City, so she clearly has it in for Nate now.

We also know Hilary’s a pro at investigating. If there’s a story to find, she’ll snoop until she gets it. No hot scoop gets past Hilary, so Nate’s secrets should come to light soon. The Young and the Restless spoilers say Nate will secretly treat Victor (Eric Braeden), so that’s certainly something Hilary should discover. She may learn other shocking tidbits, too.

Of course, Y&R fans can’t ignore the fact that Mishael Morgan’s leaving the show. She’s already taped her final scenes as Hilary, so it’s suspicious that the show’s dumping her into a new storyline. Hilary already had plenty going on with Devon (Bryton James), Shauna (Camryn Hamm), GC Buzz and the baby. Why is The Young and the Restless pushing her in Nate’s direction now?

There’s a good chance it’s because of Hilary’s departure. This could be the beginning of Hilary’s stunning exit story. There hasn’t been any recast buzz, so it seems likely that Hilary will either leave GC or be killed off. A lengthy coma or out-of-town treatment might be other options.

Whatever the case, Nate could play a role in Hilary’s sendoff. Since he’s connected to Victor, that could pull Hilary into some dangerous J.T. (Thad Luckinbill) drama. Then again, The Young and the Restless could have something else in mind. Hilary might face a sudden health crisis while in Nate’s orbit. He may struggle and possibly fail to save her life.

Jealously could also be a factor here. How will Devon feel if Hilary’s obsession with Nate grows? Hilary ordered a full dossier on him, so what’ll happen once she’s got the dirt she needs? Releasing it or using it to threaten Nate could prove problematic. If Devon gets updates, that could spark a fight and send Hilary speeding off in her car.

A similar scenario played out when Devon learned Hilary intentionally tripped Mariah (Camryn Grimes) on the air. Devon faced amnesia and serious injuries thanks to his accident that night. Will another argument put Hilary in a risky situation? If Hilary crashes and loses the baby, Devon would be devastated. If Hilary loses her own life as well, Devon may never forgive himself!

One way or another, it looks like Nate could be a crucial piece of Hilary’s exit puzzle. His arrival could set a real catastrophe in motion. We’ll keep you posted as other Y&R news comes in. Stay tuned to the CBS soap and don’t forget to check CDL often for the latest Young and the Restless spoilers, updates, and news.