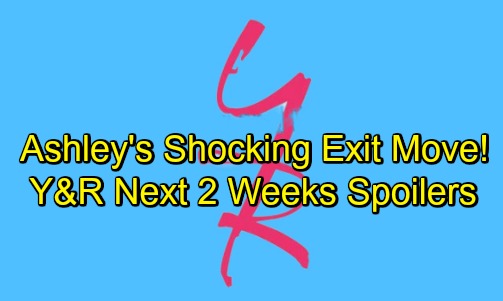 The Young and the Restless (Y&R) spoilers for the next two weeks tease that we’ll see some serious threats. The week of October 22-26 will bring one for Jack (Peter Bergman). After Kyle (Michael Mealor) finds a stunning document and gets the scoop from Dina (Marla Adams), he’ll fill Jack in on the drama. Ashley (Eileen Davidson) has a secret Jabot advantage and she could exploit it if she knew.

John (Jerry Douglas) and Dina knew Ashley might fall under her brother’s shadow, so they wanted to watch out for her. As a gift, John gave Ash the rights to all major patents and developments at Jabot. Any of the company’s important and profitable lines fall under Ashley’s control.

Jack will determine that Ashley simply can’t know about this. He’ll destroy the document in the shredder, but that won’t be the end of it. Traci (Beth Maitland) will discover the remnants in the waste basket, so she’ll put the document back together. Despite the issues between Jack and Ashley, Traci will think he owes his sister this. It’s what John would’ve wanted.

Likewise, Abby (Melissa Ordway) will argue that Jack’s trying to screw Ashley over. Another family fight will break out, but some fake flashbacks could help clear up things up. A glimpse of John and Dina’s history could help the Abbotts move forward.

Over with Mariah (Camryn Grimes), some breathy phone calls will leave her disturbed. She’ll get 10 of them from a blocked number, so she’ll share the news with her mom. Sharon (Sharon Case) will assume it’s related to the J.T. (Thad Luckibill) blackmailer. She’ll panic, so Nikki (Melody Thomas Scott) will decide to pay up.

However, this is probably connected to Tessa (Cait Fairbanks) instead. The blackmailer’s only sent letters and emails so far. Tessa, on the other hand, has been in touch with the smugglers through a blocked number. Y&R fans can undoubtedly expect more danger soon enough.

Meanwhile, Cane (Daniel Goddard) will be denied access to Lily (Christel Khalil). He’ll learn he can’t visit her, but why? The Young and the Restless spoilers say Lily will escape the real world by fantasizing this week. However, an actual getaway is still an option. It’d be a solid reason for Cane to miss out on a visit with her!

During the week of October 29-November 1, Kyle will deal with his messy love life. He’s falling for Lola (Sasha Calle), but Summer (Hunter King) keeps pulling him back to her. That trend will continue, but he can’t string both of them along forever. Kyle’s been burned by Summer too many times, so there’s a good chance he’ll be all in on Lola eventually.

Other Young and the Restless spoilers say Ashley will do something shocking. Her daring move will leave the Abbott clan reeling and questioning what’s next. Since October 29 is Ashley’s last airdate, it sounds like that’ll be a literal move. Ashley will likely announce that she’s leaving town and seeking a fresh start.

That’ll leave Billy (Jason Thompson) to battle it out with his other family members. He’ll put up a fight and hope he can recapture a little of the power he lost. Finally, Nick (Joshua Morrow) will catch Sharon off guard. Will he make a grand gesture to win her back? Will he present stunning evidence against Rey (Jordi Vilasuso)? Regardless, Sharon will assure Nick that there’ll be no reunion.