BY Heather Hughes on September 16, 2018 | Comments: one comment
Related : Soap Opera, Spoiler, Television, The Young and the Restless 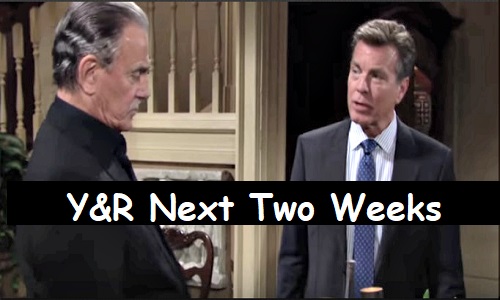 The Young and the Restless (Y&R) spoilers for the next two weeks tease that we’ll see some stressful situations. The week of September 17-21 will definitely leave Billy (Jason Thompson) in a jam. After Kyle (Michael Mealor) sets up an invite to an elite gambling circle, Billy will accept the offer and quickly dig himself into a deep hole of debt.

When Billy uses Jabot funds to climb out of it, Kyle will have him right where he wants him. Ashley (Eileen Davidson) will be torn about how to handle this, but she’ll make time to deal with other issues, too. Neil (Kristoff St. John) will battle jealousy when he spots Ashley with another man. Fortunately, it’ll just be a new chemist she’s hired. Ashley will assure Neil that she’s the only guy he’s interested in.

Other Young and the Restless spoilers say Victor’s (Eric Braeden) brother, Matt Miller (Richard Gleason), will visit Genoa City. He’ll claim to come in peace, but he’ll actually have some sneaky plans. Jack (Peter Bergman) will also drive Victor up the wall this week by digging into the past. Vic won’t want to make any stunning discoveries regarding what could be their mutual father.

Nevertheless, Jack will press on and hope he can learn the real story. Over with Mariah (Camryn Grimes), she’ll do something risky. It’ll likely be a way to help Tessa (Cait Fairbanks), but it just might backfire. Later, Mariah will join Sharon (Sharon Case) and some other loved ones for a celebration. It’ll be a fun party to honor Sharon’s college graduation.

Speaking of parties, Shauna (Camryn Hamm) will get one as well. Devon (Bryton James) will put together a little birthday bash for her, so at least he’s staying busy. Hilary (Mishael Morgan) would be proud of Devon for looking after Shauna and giving her so much support.

The week of September 24-28 will deliver some shockers. The Young and the Restless spoilers say Nick (Joshua Morrow) will catch Sharon off guard, but does that mean a pleasant surprise or a horrible bombshell? Based on Nick’s mixed behavior lately, it could go either way!

Elsewhere, Jill (Jess Walton) will head back to Genoa City and try to clean up a mess. That should tie in with Y&R spoilers about Billy’s grim reminder. He’ll be forced to face the reality of his actions, so that can’t be good. Billy’s job and relationship with Phyllis (Gina Tognoni) will be on the line.

Back with Jack and Victor, they’ll get some huge news. Will a DNA test confirm them as half-brothers? If so, will some trickery be involved? Regardless, this story’s about to bring some hot drama. Finally, Lily will have a hard time coping behind bars. She’ll grow increasingly depressed, which could take a toll on Cane (Daniel Goddard), Mattie (Lexie Ainsworth) and Charlie (Noah Alexander Gerry).