The Young and the Restless Spoilers: Nikki and Victor Fear the Worst – Victor Can’t Be Contacted – Where’s The Moustache?

BY Sean O'Brien on December 2, 2018 | Comments: one comment
Related : Soap Opera, Spoiler, Television, The Young and the Restless 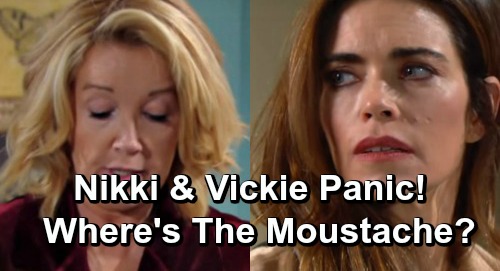 The Young and the Restless spoilers tease that Nikki (Melody Thomas Scott) and Victoria (Amelia Heinle) will overreact when they are unable to make contact with Victor (Eric Braeden). The Newman ladies nerves are frayed after dealing with the J.T. (Thad Luckinbill) storyline for nearly eight months.

So, Victor is said to have been away working on some business deals. In reality, Braeden’s character wasn’t seen for months because he was not working.

Whether the thirty-eight-year tenured Y&R icon truly took a voluntary vacation, or he’s been given less scripts to play, like many other veteran actors on this shifting show, is unknown. Fans didn’t learn that Doug Davidson (Paul) was involuntarily dropped to recurring status in January until just a few months ago.

While Eric Braeden may not actually be working on a part-time basis, it stands to reason that he also wouldn’t feel comfortable announcing his forcibly adjusted status. Various subjective social media pronouncements could be interpreted as Braeden lashing out at executive producer and head writer Mal Young, among others within Y&R, due to his reduced workload using other’s situations as cover. Then again, he may just be the type of colleague who defends those who he values.

All of the above has meant that the Moustache’s extended stay bled into a week’s worth of scenes where Victor video chatted with various members of his family, including Nick (Joshua Morrow). However, the great man, meaning Victor, not the head of Dark Horse, is about to return in the flesh.

Nikki’s latest crisis will see her brutally attacked by an unknown assailant and the Newman Ranch being torched. The Young and the Restless spoilers hint that Mrs. Newman’s need for hospitalization then causes Victor to rush to her bedside, where Victor’s latest expression of devotion helps her to heal.

It is fair to acknowledge that Braeden’s continued presence in the cast has caused some to chide the longtime actor. Just because some personalities choose to be loud doesn’t mean that their numbers are mighty. And how would the size of supporters or detractors be exactly measured? Yes, that’s part of the game in show business.

It stands to reason that if Y&R’s leading man truly was disliked by wade swaths of the audience, then he could have been unceremoniously ushered out of the show long ago. But he hasn’t, meaning that it’s possible a majority, or super majority of viewers appreciate this veteran actor’s work, as do his employers.

Meanwhile, back in Genoa City, Nikki won’t receive a response from Victor when she attempts to contact him. Considering the life-threatening events that are happening, it’s fully understandable that the visible half of Niktor freaks out. Vickie, who is also burdened by the seemingly unending J.T. matter, also frets.

The fears of both ladies will soon end. The one and only Victor Newman is about to be seen again. And, he’ll help the entire coverup crew handle what’s about to happen. CDL is a leading source for everything linked to The Young and the Restless. Check back regularly for Y&R spoilers and news!