BY Sean O'Brien on December 6, 2018 | Comments: one comment
Related : Soap Opera, Spoiler, Television, The Young and the Restless 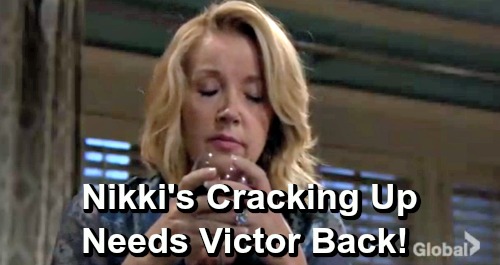 The Young and the Restless spoilers tease that Nikki (Melody Thomas Scott) dangerously turns to her old enemy, booze, in order to handle the increasing plot pressure on Friday’s new Y&R episode, December 7. Fans will soon learn if old habits open new wounds, or if Mrs. Newman’s only true love will return to save the soapy day.

Anyone’s nerves would be frazzled considering how many weird developments have taken place since J.T. Hellstrom (Thad Luckinbill) took one of the strangest character turns in recent show history. After Vickie’s (Amelia Heinle) fiance went off the rails, due to emotional issues he developed after experiencing rather mild career setbacks, all Hades broke loose in Genoa City.

Nikki’s grab for alcohol is understandable considering the endless pressure she’s been under and certainly very troubling. Thankfully Vickie will happen upon her mom in time and Nikki will pour the booze away. But that false, liquid friend still lives within the Ranch and could easily be embraced for false hope again.

Rey (Jordi Vilasuso) is just doing his job. That’s what police detectives do, especially one that replaced Paul (Doug Davidson) after initially being part of a special police commission sent to solve the evolving J.T. case. It would be nice to see Davidson return to help solve this case.

Nikki, Vickie, and the audience are collectively wondering how J.T.’s personal items are appearing above ground? There must be a grudge-holder who unearthed the corpse, left the watch behind by accident, and has used the blood-stained, off-the-rack shirt to spook the coverup crew.

Tessa’s (Cait Fairbanks) coming kidnapping will, incredibly, be handled by the coverup crew, who feel she’s been holding out on them. Yes, add yet another crime this foursome has committed. Despite Miss Porter’s denials, she’ll remain at least a partial suspect until the true villain is revealed.

Victor’s (Eric Braeden) return date will take place just prior to the Christmas. So, it’s possible that he’ll save his sweetie, fight fiercely for the coverup crew’s freedom, and nab whoever is tormenting this four-lady contingent. Swashbuckler’s are capable of achieving seemingly impossible goals. And we are talking about the Moustache.

This storyline has surely become an epic arc, based upon its length and complexity. Here’s hoping that Y&R has created a thrilling series of lead-in episodes that reach a memorable climax. Daytime still maintains the ability to wow devoted fans. They’ve invested approximately eight months of their time in this extended storyline that needs a Christmas wrap, or if truly necessary, a very early 2019 ender.