The Young and the Restless Spoilers: Nikki Under Attack – Who Is After Her? 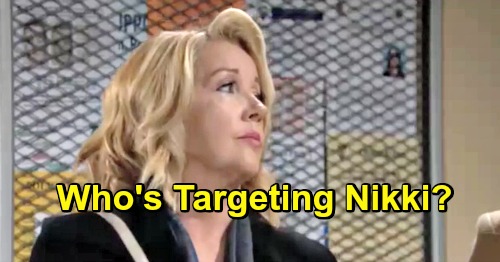 The Young and the Restless spoilers tease that Nikki (Melody Thomas Scott) is going to have a rough week. She’s been on edge for months about the whole J.T. (Thad Luckinbill) coverup, along with the rest of the cover-up crew. But the whole thing is really hitting Nikki particularly hard. After all, she’s the one who actually killed J.T. that night.

In the days ahead, Y&R spoilers say that the Newmans, and Nikki specifically, will become the victim of some serious crimes. First off, the Newman stables will burn to the ground. Thankfully, the staff will manage to get the horses out safe and sound, but the structure itself will be totally destroyed. Nikki will know immediately that it’s arson and that someone is sending her a message.

Nikki will also awaken one morning to find J.T.’s clothes in her bed, next to her. The creepy discovery will be unnerving to say the least. It will terrify Nikki that a saboteur was actually in her house and in her bedroom while she was asleep.

Finally, Nikki will actually be assaulted and, as a result, hospitalized. Someone’s clearly trying to rattle her, but who on earth could it be? It will be clear to Nikki, and likely to the rest of the cover-up crew, that someone’s onto them, and this person intends to instill terror in them. Who knows how long it will be before Sharon (Sharon Case), Victoria (Amelia Heinle), and Phyllis (Gina Tognoni) become victims themselves.

It looks like Tessa (Cait Fairbanks) will be quickly ruled out as a suspect. Nikki and Victoria just won’t see how Tessa could manage arson, breaking and entering, and assault without being detected. Plus, how would she have managed to get J.T.’s clothes? It just doesn’t seem like it could feasibly be Tessa.

The only logical conclusion is that it must be the person who moved J.T.’s body from Chancellor Park. But who could that be? An assault on Nikki is pretty mean, and it doesn’t seem like something that, say, Mac (Kelly Kruger) or Reed (Tristan Lake Leabu) would do. It would need to be someone outside of the family who didn’t mind roughing up Nikki.

Of course, there is always the possibility – although it seems remote – that J.T. survived the ordeal somehow and is messing with the ladies. He would certainly know that Nikki is the one who incapacitated him, so it would make sense that he’d go after her heavily. Could it be J.T. himself?

Who do you think is targeting Nikki? Stay tuned to the CBS soap and don’t forget to check CDL often for the latest Young and the Restless spoilers, updates, and news.