The Young and the Restless Spoilers: Nikki’s Medical Crisis Draws Victor Back To GC – The Moustache Learns About Coverup Crew 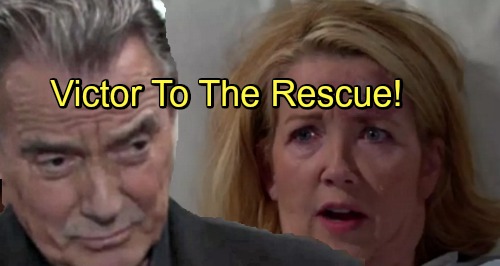 The Young and the Restless spoilers tease that Nikki’s (Melody Thomas Scott) hospitalization also enables the return of Victor Newman (Eric Braeden). Y&R fans have been missing the Black Knight, who is said to have been away on a business trip in Singapore.

In reality, Braden was taking a well-earned vacation from the set in late summer and early fall. Soap operas record episodes approximately six weeks in advance. So Victor’s absence has taken place across the past month-plus and will now be rectified by his need to return to take care of the love of his life, who he’s so often tenderly referred to as “My baby.”.

Embroiled in the developments swirling around what has just been termed a murder investigation, will be Nikki’s coming hospitalization reported in a Y&R spoilers post by CDL – note that Nikki’s medical history includes prior stints in the hospital. Her Multiple Sclerosis diagnosis resulted in the need for sudden care on varied occasions. Viewers will learn the dept of her current situation shortly, as will Victor, with Dr. Hastings (Brooks Darnell) surely involved in accessing Nikki’s situation and plotting her recovery path.

To-date, as far as is known, Victor knows nothing about the coverup crew. It seems certain that the Moustache’s reappearance in GC will dovetail with his need to defend his wife and daughter, Victoria (Amelia Heinle), from Detective Rosales’ (Jordi Vilasuso) investigation. This means that Victor will either be told, or somehow learn about all that’s happened, after which he will spring into action to fiercely defend his loved ones and the Newman name.

The full power of the great Victor Newman will sorely be needed, as Nikki can’t truthfully deny killing J.T (Thad Luckinbill). However, she did so accidentally, which became incredibly harder to assert due to the coverup crew’s foolish body dump into Chancellor Park on that fateful night last spring. Resulting tales told to the authorities, including Paul (Doug Davidson) and Rey, served to dig a deeper hole for all involved ladies.

Nikki’s recent quarter-million dollar payoff to an anonymous blackmailer, since revealed as Tessa (Cait Fairbanks), established yet another piece of evidence that makes Mrs. Newman look terribly guilty. As evidence mounts against her and the others, Rey’s case will appear to be impenetrable.

Within Y&R’s world, since he first debuted in 1980, Victor has been a superhero. His arrival, in the Nikki of time (pun intended), will eventually prove to be decisive. But getting from here to there is why devoted viewers of this iconic steamer will, as always, enjoy the soapy storyline ride.