BY Heather Hughes on October 7, 2018 | Comments: one comment
Related : Soap Opera, Spoiler, Television, The Young and the Restless 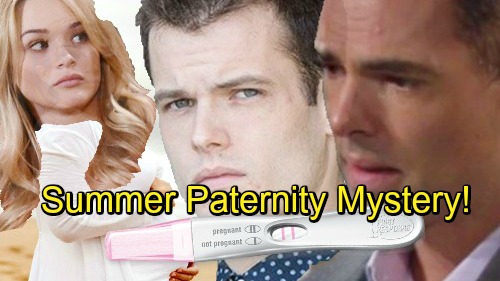 The Young and the Restless (Y&R) spoilers tease that Kyle (Michael Mealor) will grow closer to Lola (Sasha Calle) this week. These two have had a few scenes here and there, but they need to go a bit deeper. Thankfully, they’ll get the chance to do that soon enough. Kyle will manage to make quite an impression on Lola. She’ll do the same by giving him a passionate kiss.

However, The Young and the Restless spoilers say Summer (Hunter King) will struggle as all this unfolds. She’ll witness the lip lock and feel rather envious. Summer’s the kind of gal who always wants what she can’t have. We’re also dealing with a “never know what you’ve got ‘til it’s gone” scenario. Summer’s been rather glum ever since Kyle got fed up and started pushing her away.

Of course, Summer won’t be able to get Billy (Jason Thompson) back in bed either. He’ll be in rehab, so she won’t even have a good distraction. That means Summer will put all her attention on Kyle and the new lady in his life. Summer will undoubtedly try to mess with Lola soon. She may bring up her history with Kyle and attempt to scare Lola off.

Lola clearly has a fierce side as well, so she won’t let Summer push her around. Since it looks like Lola will befriend Tessa (Cait Fairbanks) soon, perhaps they can even do some tag-teaming against her! Summer would be better off working the Kyle angle. He’s still got a weak spot for her, so she should try to exploit it.

During the week of October 15-19, Kyle will indeed end up torn. Part of him will really want to see where things are headed with Lola. She’s got a special spark that entices him. Nevertheless, Summer is Summer and Kyle seems drawn to her for whatever reason. She’ll probably flaunt her body and throw herself at Kyle the first chance she gets.

It’ll take more than that to win Kyle over though. Summer will have to bare her soul (if she has one). If Summer can pull that off, she might score herself another shot. This would be the perfect setup for a paternity mystery. Summer recently slept with Billy, so Y&R just needs to get her in bed with Kyle soon. If Summer turns out to be pregnant, they can let us wonder who the daddy might be.