BY Marcy Cohen on May 16, 2018 | Comments: Leave Comments
Related : Soap Opera, Spoiler, Television, The Young and the Restless 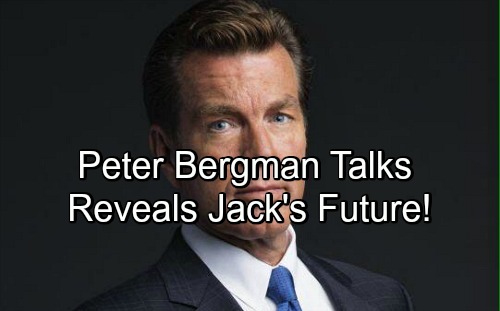 The Young and the Restless (Y&R) spoilers tease that Jack (Peter Bergman) will continue to struggle. He was devastated when Dina’s (Marla Adams) interview revealed he’s not John’s (Jerry Douglas) son. Of course, the DNA confirmation was truly the crushing blow. Jack couldn’t live in denial anymore and that pushed him over the edge.

Jack’s out of control and that’ll bring even more drama for the Abbott clan. Wednesday’s car crash should make everyone realize Jack needs serious help. This family has to make him understand that his DNA doesn’t matter.

Jack, Billy (Jason Thompson), Kyle (Michael Mealor), Ashley (Eileen Davidson), Abby (Melissa Ordway) and Traci (Beth Maitland) are all connected. For some, it’s by blood. For others, it’s a bond that’s formed through the years. In the end, it doesn’t matter as long as they love each other.

However, Jack will have a hard time wrapping his head around that fact. In an interview with TV Insider, Peter Bergman dished on how Jack’s feeling and what’s next in this storyline. He admitted that Ashley went through a similar ordeal, but he thinks Jack’s circumstances may be even tougher.

Jack assured Ashley that she was John’s child in every way that counts. Why can’t Jack apply that to himself? Bergman suggested, “He can say that to Ashley and believe it, but his situation just seems different. She wasn’t walking around trying to be John Abbott.”

The interviewer also brought up the way Dina tends to refer to Jack as “John.” Bergman confessed that he can’t explain Dina’s actions, but it’s not something Y&R just threw in. “I can tell you our writers have researched this,” Bergman said. “They have talked to experts. It might be a really informed choice. So maybe this is not an uncommon thing.”

Bergman hinted that fans may be on the right track about this story decision. Dina’s mistaking Jack for someone who supposedly isn’t his real father, which seems strange. “Hopefully, the audience is saying, ‘Wait, there’s a wrinkle here.’ Wrinkles are great,” Bergman teased.

There was also plenty of praise for Bergman’s onscreen son in this interview. He’s super impressed with Michael Mealor’s work as Kyle. As for what’s ahead, things could get quite bleak. Jack’s lost the will to live up to John’s legacy, so it’ll be hard to climb out of this pit.

Bergman said, “If you spend your life trying to be John Abbott, you’re on your best behavior. Jack’s now asking himself, ‘Why am I trying to be such a good guy?’” The Young and the Restless spoilers say Jack will focus on finding a new path, which should be painful at first. It’ll be a difficult process full of sorrow, anger and regrets.

On the bright side, Jack should come out of this stronger than ever. Plus, those Dina clues we mentioned could mean this paternity fiasco is a lie. The Young and the Restless has been known to throw in several twists, so Jack may remain John’s son in the end.

How do feel about this storyline so far? Are you irritated with the DNA disaster or are you waiting to see how it’ll play out? We’ll give you updates as other Y&R news comes in. Stay tuned to the CBS soap and don’t forget to check CDL often for the latest Young and the Restless spoilers, updates, and news.