The Young and the Restless Spoilers: Pregnant Phyllis Kicks Off Paternity Mystery – Billy, Jack and Nick Are Baby Daddy Contenders?

BY Heather R Brueck on August 8, 2018 | Comments: one comment
Related : Soap Opera, Spoiler, Television, The Young and the Restless 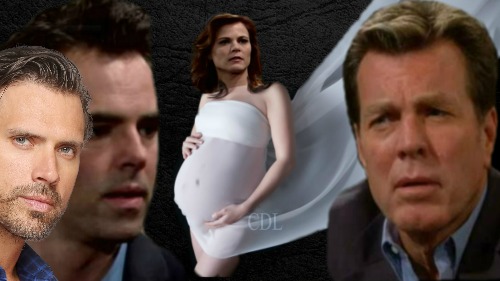 The Young and the Restless (Y&R) spoilers tease that Phyllis’ (Gina Tognoni) mistakes will come back to haunt her – perhaps in more ways than one. She already slept with Nick (Joshua Morrow) behind Billy’s (Jason Thompson) back. Now Jack’s (Peter Bergman) almost ready to make his move as well. He recently revealed that he’s still in love with Phyllis, so he’ll soon take a risk and plant a kiss on her.

That could easily lead to another steamy betrayal. Phyllis was unattached the night she hooked up with Nick, but she obviously planned to reunite with Billy later. She can’t get away with her actions on a technicality. Phyllis simply couldn’t control her desires and that could be the case again with Jack.

It may not be long until “Phack” is back on – at least for one passionate night. Phyllis has been turning to Jack for comfort lately, so that’s exactly what she’ll do after another shouting match with Billy. His secret deal will hurt Fenmore’s and leave Phyllis stuck in Lauren’s (Tracey E. Bregman) mess.

Once Jack shows his support once more, Phyllis may be unable to resist temptation. Frustration with Billy plus a reassuring ex usually equals lovemaking! Of course, this could set up an intriguing Y&R storyline. Will Phyllis end up pregnant and spark a paternity mystery? If Phyllis adds Jack to her list of recent hookup partners, it could give her three “baby daddy” possibilities.

All three options have had baby-daddy drama with Phyllis in the past. She already went through plenty of paternity chaos with Summer (Hunter King), but maybe she’ll relive the nightmare. If Phyllis gets knocked up by Nick, Sharon (Sharon Case) would call off the “Shick” nuptials in a flash.

This news would certainly throw Jack for a loop, too. He should really be awaiting grandkids from Kyle (Michael Mealor), not starting over with diapers and bottles himself. At the same time, many Young and the Restless fans would love to see Jack have a daughter. Jack would be all in no matter what, so this could lead to the reunion he’s been dreaming of.

Billy dodged a bullet when Chloe’s (Elizabeth Hendrickson) little girl turned out to be Kevin’s (Greg Rikaart). It was just as well since Kevin was thrilled to welcome Bella into his life. Billy may not beat the odds if another paternity mystery kicks off.

You can bet Billy would be upset at first, especially since he won’t be on good terms with Phyllis. However, these two previously brought up the topic of having a kid. They nixed the idea, but the looks on their faces told a different story. There seemed to be a hint of longing for a “Philly” baby, so this could be what brings the couple back together.

Paternity mysteries are soap staples, so Y&R might be gearing up for another one. This could provide months of great drama. Which man do you think Phyllis should be with? Is her perfect match Billy, Jack or Nick? If Phyllis indeed gets pregnant, the baby winner will likely be the one she gravitates toward in the end.