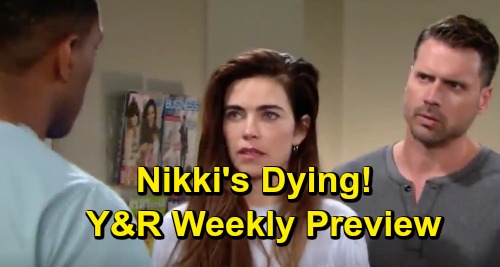 The Young and the Restless (Y&R) spoilers for the week of December 17-21 tease a shocking preview promo as Nikki’s (Melody Thomas Scott) ordeal will bring a Newman family nightmare. Once she’s rushed to the hospital, Nate (Brooks Darnell) will identify her and spread the word. He’ll want Nikki’s loved ones to be notified about the hit-and-run accident immediately.

While Nikki’s in emergency surgery, the people who care about her will fret in the waiting area. Nick (Joshua Morrow), Victoria (Amelia Heinle) and Jack (Peter Bergman) will certainly be on hand to worry. Sharon (Sharon Case) and Phyllis (Gina Tognoni) will show their support as well. They’ll both realize Nick’s going through a rough time, so they’ll want to help.

Unfortunately, that could lead to some jealousy and tension. The Young and the Restless spoilers say Nick will gravitate toward Sharon during the chaos. When Nikki doesn’t improve after the surgery, Nick will embrace Sharon over the possibility of losing his mom.

Phyllis will spot their warm moment and wonder if she’s really got the number-one spot in Nick’s heart. She’s already concerned about Nick being hung up on Sharon, so this will just add fuel to the fire. Of course, Reed (Tristan Lake Leabu) will also have a horrible week. He’s to blame for running down Nikki, so he’ll battle guilt over the secret he’s keeping.

The Young and the Restless spoilers say Reed will visit his grandmother in the hospital. He’ll fret about causing Nikki’s accident and wrestle over whether he should confess. Nick won’t help matters when he declares he’s going to find who did this and make him pay! That should leave Reed terrified about the consequences of a painful admission.

Y&R’s weekly promo shows a furious Nick being held back. Perhaps Reed will admit the truth and cause a waiting room confrontation. This could lead to major tension between Victoria (Amelia Heinle) and Nick. Despite her son’s reckless actions, Victoria may want to protect him. Nick, on the other hand, might think rebellious Reed is out of chances and deserves to go down.

The Young and the Restless spoilers point to Reed’s confession plan happening during the week of December 24-28, but sometimes promos skip ahead a bit. Reed could easily be the reason for the almost brawl. Then again, there could be someone else who gets on Nick’s bad side. He’ll be on edge over Nikki, so it won’t be hard to set him off.

Regardless, Nate will urge Nikki’s family to prepare for the worst. He won’t have high hopes for Nikki’s survival, but we all know she’ll pull through eventually. Nikki has to be around for more J.T. (Thad Luckinbill) drama! We’ll give you updates as other Y&R news comes in. Stick with the CBS soap and don’t forget to check CDL often for the latest Young and the Restless spoilers, updates, and news.