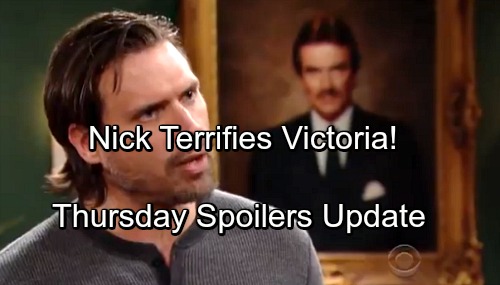 The Young and the Restless (Y&R) spoilers for Thursday, April 19, tease that Kyle (Michael Mealor) will try to make amends with Jack (Peter Bergman). He’ll insist that he only wanted to help Jabot. Jack won’t agree since Kyle teamed up with Victor (Eric Braeden) behind his back. They’ll bicker about Jack shutting Kyle out after he left town, but Jack will promise that he didn’t mean to.

Kyle will mention the IPO and how it would benefit the company. Jack will insist that it’s too risky, so Kyle will turn his attention to another project. He’ll gather up a few family members for a little get-together. Ashley (Eileen Davidson), Billy (Jason Thompson) and Abby (Melissa Ordway) will show up to celebrate Jack’s release. They’ll all remain suspicious of Kyle’s sudden push for peace.

Nevertheless, Kyle will state that he’d like to stick around. He’ll convince Jack to give him an opportunity to prove himself. Later, Jack will urge Billy to come back to Jabot and monitor Kyle’s activities. Since there’s a lot at stake and Kyle can’t be trusted, Billy will get on board with the idea.

Other Young and the Restless spoilers say Neil (Kristoff St. John) and Devon (Bryton James) will butt heads at Hamilton-Winters. Neil will want Hilary (Mishael Morgan) back at GC Buzz and out of their hair at the office. He’ll push for big changes now that he’s in Genoa City again.

Devon won’t appreciate Neil’s bossiness. He’ll concede that the baby agreement was a mistake, but he won’t let Neil walk all over him. Afterward, Devon will run into Hilary and lash out at her for causing more issues. He’ll fume over Hilary’s selfish nature and stomp off. Once Devon and Neil have both cooled off, they’ll meet back up to exchange apologies.

At Newman Enterprises, Nikki (Melody Thomas Scott) will have an announcement to make. She’ll tell Victoria (Amelia Heinle) and Ashley that Victor named her the interim CEO. Y&R spoilers say Ashley will have some concerns. She’ll point out that Nikki hasn’t been around to see their usual routine.

However, Nikki will insist that she’s up for the challenge. After Ash exits, Victoria will ask if Nikki can really handle this. She’ll be worried since Nikki killed J.T. (Thad Luckinbell) and the partygoers helped her cover it up. That’s a big secret, but Nikki will think she can lock it away and focus on her duties.

Elsewhere, Nick (Joshua Morrow) and Billy will chat about the J.T. drama. The Young and the Restless spoilers say Nick will be determined to find J.T. and get closure for his family. He’ll eventually stop by Newman to tell a rattled Victoria. Nick will promise that if the cops can’t make progress, he’ll track J.T. down on his own.

Victoria will hope to keep J.T.’s death a secret, but you can bet the news will spread sooner or later. We’ll give you updates as other Y&R details emerge. Stay tuned to the CBS soap and don’t forget to check CDL often for the latest Young and the Restless spoilers, updates, and news.