BY Heather Hughes on July 4, 2018 | Comments: one comment
Related : Soap Opera, Spoiler, Television, The Young and the Restless 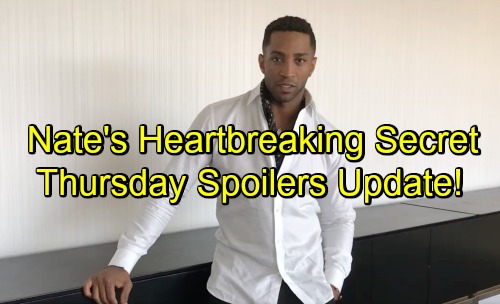 The Young and the Restless (Y&R) spoilers for Thursday, July 5, tease that Ashley (Eileen Davidson) will be summoned to Neil’s (Kristoff St. John) place. He’ll reveal that they’ve got another crisis on their hands at Newman. Neil will admit he was tipped off to a big story. Once it’s published, Neil will pull it up on his laptop. They’ll realize it’s all about J.T. (Thad Luckinbill) vanishing without a trace.

Neil and Ashley will debate whether Victor (Eric Braeden) had something to do with that. Ashley will insist that Victor’s capable of anything, but Neil won’t be sure he resorted to kidnapping or murder. After sending some messages to Victor, Neil will reassure Ashley. He’ll feel like they can still control the situation, but Ashley won’t seem hopeful.

Soon after, Nate (Brooks Darnell) will come downstairs wearing only a towel. A shocked Ashley will greet him, so he’ll hustle back up to put some clothes up. Once he’s dressed, Nate will embrace Ashley. They’ll take a moment to catch up before Nate mentions being on sabbatical.

Later, Y&R spoilers say Nate will express concern to Neil. He’ll wonder if joining “Team Victor” is really a good move right now. After all, more Newman disasters hit every day. However, Neil will push Nate to focus on helping Victor get healthy. He won’t think Nate should start judging his patient and the drama that comes with him.

At the same time, Neil would understand if Nate wanted to bail. He’ll let him know that, but Nate will refuse to walk away when he’s needed. Meanwhile, Summer (Hunter King) will pester Billy (Jason Thompson) about his plans for the evening. Since Phyllis (Gina Tognoni) is out of town, she won’t get in the way of what Billy’s about to do.

Summer will see right through Billy’s lies about financial associates and clients. She’ll realize he’s headed to play poker, so she’ll want to join the fun. Since Summer won’t shut up, Billy will finally cave in and let her attend as a spectator. He won’t want Summer to rack up any more debt tonight. Later, Billy will bet his new yacht and lose big time. He’ll have a tough time explaining this to Phyllis!

Back with Neil, he’ll throw a little homecoming party for Nate. Hilary (Mishael Morgan) will pummel him with personal questions, so there’s sure to be plenty of tension. Neil will finally pull Hilary aside and explain that the love of Nate’s life died. He’ll note that it’s the one-year anniversary of her death, so Hilary will be mad that she wasn’t given a heads-up.

Other Young and the Restless spoilers say Dina (Marla Adams) will do pretty well during Jack’s (Peter Bergman) mock trial. She’ll recall what she’s supposed to, but drama will erupt afterward. Dina will put on a hat and sunglasses as she wanders around. She won’t remember who Jack is and she’ll call Ashley by the wrong name. Dina’s confusion will lead to a meltdown, but they’ll calm her eventually.

The Young and the Restless spoilers say Jack will call off Dina’s court appearance. He won’t want to make things more difficult for her. Fortunately, Kyle (Michael Mealor) will step up to do some grave digging later this week! We’ll give you updates as other Y&R news comes in. Stay tuned to the CBS soap and don’t forget to check CDL often for the latest Young and the Restless spoilers, updates, and news.