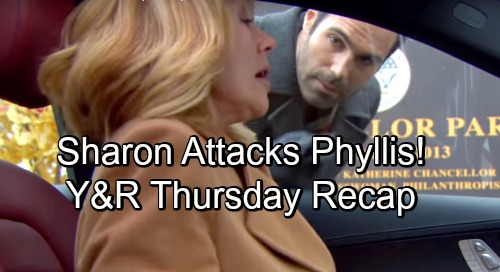 The Young and the Restless (Y&R) spoilers update and recap for Thursday, November 8, tease that Victoria (Amelia Heinle) will give Nikki (Melody Thomas Scott) updates on the watch. They’ll be on edge as they hang out near the crime scene, which probably isn’t the best idea! Later, Rey (Jordi Vilasuso) will catch up with Nikki in her car. He’ll spook her a bit, but he’ll just want info on the landscapers and sculpture designer.

Mariah (Camryn Grimes) will do a report for GC Buzz before fishing for a hotter scoop. She’ll try several times, but Rey will block her with a “no comment.” At Crimson Lights, Tessa (Cait Fairbanks) will reluctantly serve Phyllis (Gina Tognoni) coffee. She’ll push Phyllis to take it to-go, but that plan won’t pan out. Instead, Phyllis will plop down at a table with Nick (Joshua Morrow) and start gabbing.

Y&R spoilers say Phyllis will bring up Billy (Jason Thompson). She’ll admit he knows about their sex session, but she won’t be sorry about that. Phyllis will think it serves Billy right after what he did. Nick will want Phyllis to elaborate, but she’ll keep quiet about the Summer (Hunter King) hookup.

Nick will also suggest going out for dinner sometime. He’ll make it clear that this isn’t a rebound or revenge thing for him. When Sharon walks in and spots them, she’ll immediately start ranting. Sharon will hope that Phyllis encounters nothing but heartbreak, but Phyllis won’t seem fazed.

Afterward, Sharon will join Rey in his apartment. They’ll discuss love, broken promises and what Sharon deserves. She’ll laugh about Rey being a romantic and he’ll note that she has a heart of gold. The Young and the Restless spoilers say they’ll almost kiss, but Rey will stop himself just in time.

Moments later, Rey will be called away for work. He’ll end up doing a press conference about new evidence, which Sharon will watch back at his place. She’ll seem nervous as Rey declares the J.T. (Thad Luckinbill) case a murder investigation.

Over with Kyle (Michael Mealor), he’ll be honest about his latest Jabot assignment. Lola (Sasha Calle) will learn Summer (Hunter King) was behind it, but she won’t consider her a threat anymore. Talk will turn to Lola’s restaurant plans. Kyle will offer to finance one for her, but Lola will decide she’d rather pay her own way.

Meanwhile, Esther (Kate Linder) will bug Mariah about doing a special on her life and bond with Katherine (Jeanne Cooper). Mariah will promise to get back to her on that, so Esther will take off. Finally, Tessa will push Mariah to spill whatever’s bothering her. She’ll sense that something’s on Mariah’s mind.

Mariah will awkwardly ask if Tessa wants to live together, which will earn a smile in return. The Young and the Restless spoilers say Mariah will indeed move in with Tessa soon, but secrets could spell trouble! We’ll keep you posted as other Y&R news comes in. Stay tuned to the CBS soap and don’t forget to check CDL often for the latest Young and the Restless spoilers, updates and news.