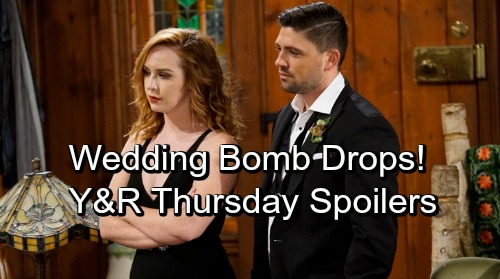 The Young and the Restless (Y&R) spoilers for Thursday, October 4, tease that someone surprising will make his way back to Genoa City. After a long flight from Mumbai and presumably a few delays, Noah (Robert Adamson) will arrive in town. He’ll hope he’s got enough time to get changed and hustle over to the church. Noah wouldn’t want to miss his parents’ wedding!

Of course, Sharon (Sharon Case) could end up missing it herself. There may not be a wedding at all if Sharon chooses to be a no-show. While Mariah (Camryn Grimes) and Nick (Joshua Morrow) contemplate where Sharon might’ve gone, perhaps Noah will track her down. Sharon would probably like to hear Noah’s perspective on the situation. He’s pretty much an expert in heartbreak by now.

Whatever the case, Sharon will be lost in thought. In Wednesday’s Y&R episode, Sharon tells Mariah to pretend their conversation never happened. Despite the pain, she intends to move forward with the wedding and accept that Nick made a mistake. Will Sharon change her mind on Thursday’s new Y&R episode? Her absence from the ceremony certainly isn’t a good sign.

Other Young and the Restless spoilers say Mariah will face plenty of pressure. She’ll do her best to keep Summer’s (currently played by Bayley Corman) mouth shut as Nick seeks answers. Nick will eventually push Mariah to tell him what she’s hiding. She’ll have to decide if she’s willing to break her promise to Sharon, but there’s always a chance Summer could explain instead.

Victoria (Amelia Heinle), Nikki (Melody Thomas Scott) and Phyllis (Gina Tognoni) may make some wrong assumptions here. They all know Sharon’s been struggling with the J.T. (Thad Luckinbill) secret, so they may fear that’s the reason for her cold feet. However, Phyllis should consider the hookup drama sooner or later. She must know shockers have way of exploding in Genoa City!

Whether Sharon moseys over or not, The Young and the Restless spoilers say a wedding bomb will indeed drop. It looks like that one-night stand could be public knowledge by the end of the week. We’ll give you updates as other Y&R news comes in. Stay tuned to the CBS soap and don’t forget to check CDL often for the latest Young and the Restless spoilers, updates, and news.