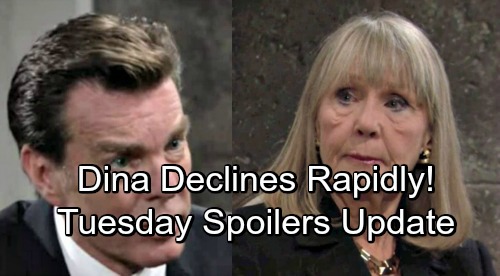 The Young and the Restless (Y&R) spoilers for Tuesday, August 28, tease that Phyllis (Gina Tognoni) and Billy (Jason Thompson) will find a new home. They’ll arrive at the Abbott mansion and announce that they’re moving in temporarily. Ashley (Eileen Davidson) won’t be too happy, but Billy will declare that he has a right to be there. However, he’ll be a bit concerned about how Phyllis will handle it.

Phyllis will confess that being in the house again brings back a lot of memories, including when Jack (Peter Bergman) tossed her out. Still, she’ll feel confident that she can settle in with Billy. He’ll suggest that if anything shifts for her, she can always change her mind about the move.

Billy and Phyllis will also encounter Dina (Marla Adams), who’ll be upset by their presence. They’ll try to make Dina comfortable with their decision to live there, but they’ll definitely notice how far she’s declined. After Phyllis and Billy mention it to Jack, he’ll confide in Ashley. Jack will feel like he’s inching closer to losing his mother, which makes his father search seem more desperate.

Other Young and the Restless spoilers say Mariah (Camryn Grimes) will lose control of a bridesmaid meeting. She’ll gather Nikki (Melody Thomas Scott), Victoria (Amelia Heinle) and Abby (Melissa Ordway) to talk about wedding plans, but they won’t stay long. After Victoria gets stressed and excuses herself, Nikki will follow her.

That’ll leave Mariah and Abby to discuss the latter’s involvement in the nuptials. Abby will admit that she only agreed to be part of this for Nick’s (Joshua Morrow) sake. She’ll eventually fret about Victoria, but Mariah will think Nikki should deal with that crisis.

Elsewhere, Nikki will push Victoria to open up about her struggles. Victoria will admit that she hasn’t been speaking with her therapist. She can’t share her biggest secret, so all this is really taking a toll. Nikki will think there has to be a way to help Victoria. She’ll vow to take care of this for her daughter soon enough.

Back with Mariah, she’ll bump into Kyle (Michael Mealor) at The Dive Bar. Y&R spoilers state that they’ll rehash the Tessa (Cait Fairbanks) drama. Kyle will assure Mariah that his P.I. has kicked off an investigation. Mariah will worry that Tessa’s trying to steer clear of her, but Kyle just won’t believe that. He’ll explain why and argue that Mariah should keep hoping for Tessa’s return.

Later, Kyle and Ashley will meet up. The Young and the Restless spoilers say Kyle will be ready for Billy’s takedown. He’ll suggest that they can get Billy to borrow more Jabot money and establish a pattern of bad behavior. Ashley won’t be keen on feeding Billy’s gambling addiction, but Kyle will promise that they’ll stop once he’s been dethroned.

It sounds like Kyle and Ashley are about to play a dangerous game. We’ll give you updates as other Y&R news comes in. Stay tuned to the CBS soap and don’t forget to check CDL often for the latest Young and the Restless spoilers, updates, and news.