BY Heather Hughes on April 27, 2018 | Comments: one comment
Related : Soap Opera, Spoiler, Television, The Young and the Restless 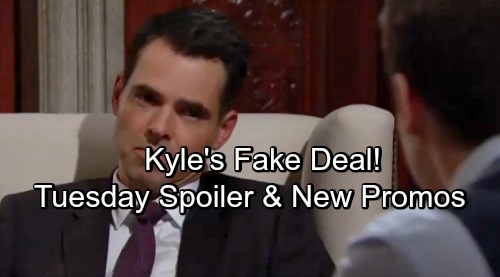 The Young and the Restless (Y&R) spoilers for Tuesday, May 1, tease that Kyle (Michael Mealor) will form a new plan. Now that he knows about Jack’s (Peter Bergman) paternity, Kyle believes some changes are necessary. If Dina’s (Marla Adams) claims are accurate, Jack and Kyle aren’t blood Abbotts.

Kyle might want another shot at the throne one day, so he needs to get that pesky clause scrapped. He also realizes Jack could be tossed out as CEO if the secret’s exposed. Until the blood-Abbott rule is eliminated, only Billy (Jason Thompson) and Traci (Beth Maitland) are eligible to be Jabot’s leader.

The Young and the Restless spoilers say Kyle will want to settle the matter ASAP. That’s why he’ll turn to Billy for help. Of course, Kyle won’t fill Billy in on the whole story. He’ll leave out Dina’s revelation, but he’ll still want to talk about ditching the clause and focusing on family unity.

Billy doesn’t trust Kyle, so he’ll undoubtedly wonder where all this is coming from. Kyle’s been plotting with Victor (Eric Braeden) behind Jack’s back, so Billy may not buy this bring-the-family-together stuff. He may worry that Kyle’s got something up his sleeve – and he’d be right!

Nevertheless, Kyle will insist that his intentions are pure – but as the weekly video below shows, they are anything but. He’ll argue that it’s a great way to promote peace within the Abbott clan. After Kyle convinces Billy to join his fight, they’ll take the idea to Jack. Unfortunately, Jack won’t see the point since he already offered to ditch the clause. Ashley (Eileen Davidson) still didn’t make a Jabot comeback, so Jack won’t get why this would help.

Kyle will maintain that it’s in the best interest of the family, which will prompt Jack to agree. Alas, Jack won’t be in any hurry. As Kyle grows anxious and tries to rush this along, he could create some suspicions. This Y&R storyline is really heating up.

Other Young and the Restless spoilers hint that Nikki’s (Melody Thomas Scott) fun will come to an end. It looks like she’ll break things off with Arturo (Jason Canela) to pacify Victor. Nikki will be bummed, but at least Arturo will have more time for Abby (Melissa Ordway) soon. This could lead to a steamy romance, so stay tuned!

Are you glad Nikki and Arturo are splitting? Should Abby and Arturo become Y&R’s next couple? We’ll give you updates as news comes in. Stick with the CBS soap and don’t forget to check CDL often for the latest Young and the Restless spoilers, updates, and news.