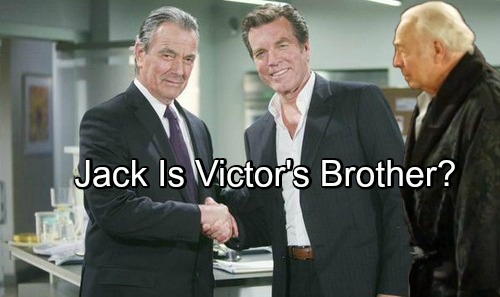 The Young and the Restless spoilers tease that a second unmasked opponent will fight Victor (Eric Braeden). Jack (Peter Bergman) was not revealed as Nick’s (Joshua Morrow) partner at Dark Horse, he’ll also appear to confirm that Albert Miller (played by the late, great George Kennedy) was his father.

Seasoned Y&R fans know that Victor has a known brother, Matt (Robert Parucha). Albert and Cora (Dorothy McGuire) were the parents to that child. But Dina’s (Marla Adams) revelation that John (Jerry Douglas) wasn’t Jack’s biological father provoked a question. Who was, or is that man?

Victor has no known sisters through Albert. So Jack couldn’t have been involved romantically with anyone who would turn out to be his half-sister. Ashley’s father was Brent Davis (Bert Kramer), so there’s also no chance that Albert was her father, which would have meant she married her half-brother. These historical considerations must always be reviewed where potential storyline reveals are concerned.

Albert is deceased. So if he turns out to be Jack’s father the only surviving parent to deal with is Dina. Considering her current health and state of mind, Jack would (eventually) handle what she did. No interaction with Albert would be possible, instead Jack’s recognition of his newfound sibling would be the main attraction.

This type of epic re-imangining of two legacy character’s backstories would surely be controversial, which probably would result in a ratings’ upside. News of Jack’s link to Victor would extend well beyond Y&R’s audience into the full soap world and potentially past that, meaning that former viewers and fresh faces would start watching. From that point Y&R’s handling of the created storyline would determine retention levels.

Jack doesn’t know who his real father is yet. That almost certainly means Nick also has no knowledge of this issue, as his recent information dive was focused on Victor. Imagine Nick’s good fortune then when it’s revealed that his dad and Jack are blood-tied through Albert.

Nick sought a trusted ally to help him coldly fight his father. Jack seemed to be a strong choice. But a paternity revelation would dramatically increase Jack’s zeal in ways that can’t be imagined.

Christian Miller rebranded himself as a victorious (Victor) new man (Newman). Many years after doing that he and Nick came to meet Albert on his death bed in a care facility. Those epic scenes are vividly recalled by devoted fans and have been cited by Braeden and Morrow as deeply memorable. Some believe, including this scribe, that those scenes certainly rank with the best of Braeden’s entire Y&R run, if not actually garnering the top spot.

Jack Abbott becomes Jack Miller while also working with Nick at a new company, Dark Horse, that takes on Newman Enterprises? There are varying expressive words that would be heard if that happens. One of them is, wow! CDL is a leading source for everything linked to The Young and the Restless. Check back regularly for Y&R spoilers and news!