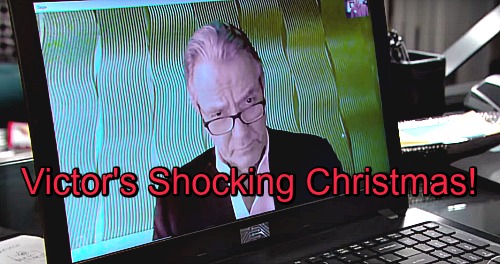 The Young and the Restless spoilers that Eric Braeden’s (Victor) well earned vacation has come to an end. Y&R’s leading man recently took to social media to announce his return to the set. As daytime fans will learn, the Moustache will soon be involved in Newman family Christmas drama.

Nikki (Melody Thomas Scott) and Vickie (Amelia Heinle) are keeping a secret from the head of their family. Victor doesn’t know that his wife accidentally killed J.T. (Thad Luckinbill) in April and that she, Vickie, Phyllis (Gina Tognoni), Sharon (Sharon Case), and now, Mariah (Camryn Grimes), are covering it up.

Victor also doesn’t know that Tessa (Cait Fairbanks) accidentally discovered digital video evidence within Nick’s (Joshua Morrow) Dark Horse files and used it to blackmail the so-called coverup crew. If Tessa told Vickie the truth, then some unknown figure later moved J.T.’s body and is also serving as another threat that is leading to a Christmas time storyline climax.

Why is the annual late December holiday being tagged as the period when the then-eight month arc would end? Among other contributing factors, Reed (Tristan Lake Leabu) is set to return home next month. J.T.’s son is being written back for a clear reason. What else could it be but to be part of this storyline’s end?

The Newman family came to detest Paul (Doug Davidson), as the Chief of Police and his wife, GC’s District Attorney, Christine (Lauralee Bell) used J.T. in an attempt to prove Victor was price-fixing around the globe. With whatever Newman Enterprises’ founder and Chief Executive Officer was suspected of, no evidence was found.

As devotees of this comprehensive soap site know, Davidson has at least been reduced to recurring status and may have been fully written out. The write-in of Jordi Vilasuso (Rey) served to supplant Paul and position detective Rosales as the main officer in town.

Rey’s teased solve of the coverup crew’s crimes telegraphs to Vilasuso’s new character being appointed head of the GC Police Department. That likely happens after the J.T. case has been closed, which must logically mean that Nikki and Vickie and the rest of the coverup crew will face some form of justice.

Who else has the power to fight whatever book Rey tries to throw at Nikki and Vickie? Which character is mostly likely to permanently handle Tessa and whatever other unknown character may be targeting the Newman ladies, along with the other coverup crew members?

Clearly the answer to both questions raised would center upon one name. He’s played by one of the most iconic actors within this genre. Yes, Victor Newman will ride in on his white horse (sorry, Nick) to save the day, some way, some how. And all feels likely to happen around Christmas and extend into the 2019 season.